It was a very normal day at the office and was looking forward to an upcoming camp at weekend. Wednesday afternoon a call ringed in my mobile and it informed camp is canceled due to bad weather. Already one day leave applied and 2 days in the weekend is there. An urge to go on a trip was high so without thinking much-booked tickets to Gokarna. 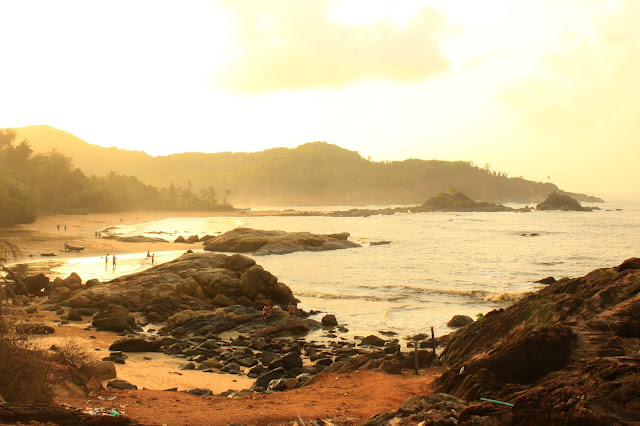 Yeah! It was on the waiting list and next day night when I packed and reached railway station after a lot of talking to TTE, got a berth after Kochi. Then it was long hours sound sleep before two long days of wandering. 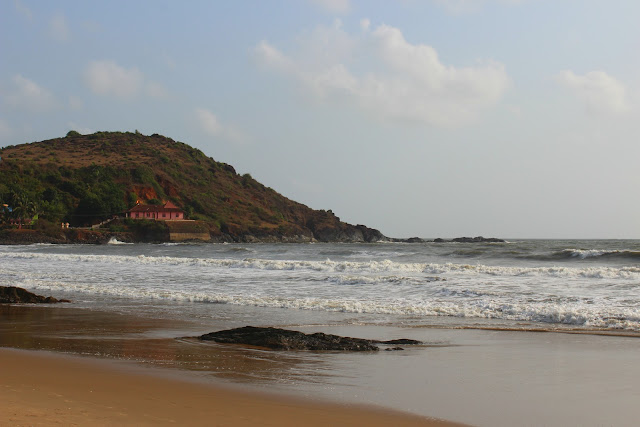 Dozing and waking up, I am reached one hour late at Gokarna road railway station. It was so empty, other than me there was hardly 10-20 passengers who got down there. I called my hotel people and they suggested to hire an auto to reach Gokarna which is 8km away from the station. 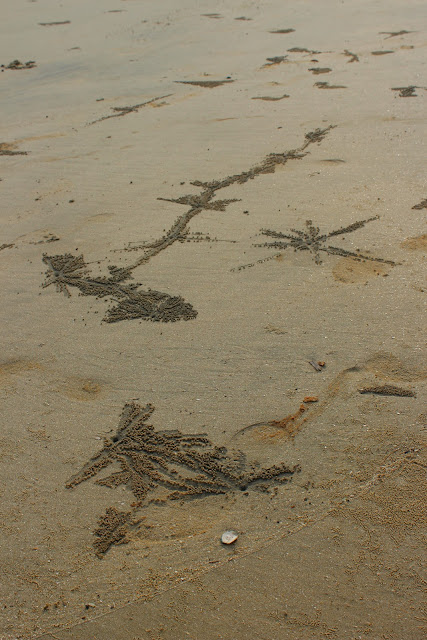 No bargain worked out but 150rs for auto. After a little confusion, my auto reached my hotel in 30 minutes. It was 2 PM by then and the atmosphere temperature was rising high on my skin.
My hotel - No, it was more like a homestay. They showed my room at upstairs with attached bathroom and the food was from the nearby restaurant. Even before getting fresh I went out to fill my tummy. The restaurant - Again no, it was a family running the hotel at their home. few tables and chairs were spread under the dry coconut leaves roof at their courtyard. One young girl who took the order brought a Tali meal in front of me. I was slow in eating and that offered me a friendship with Pradeepa - young girl at the restaurant. She was doing her 12th and her mother with the grandmother running the hotel. 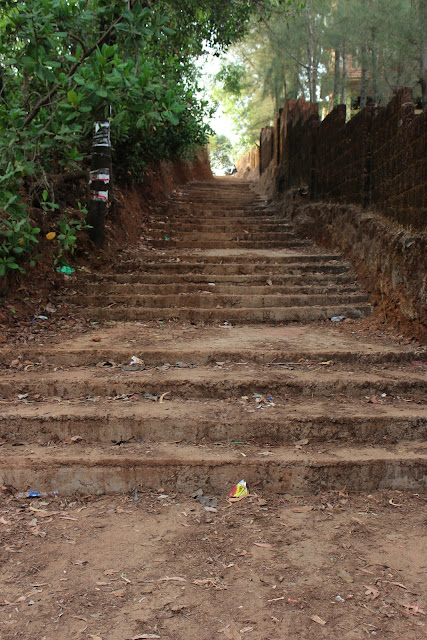 I asked her suggestions to roam around, and she suggested to take a scooter and I am not good enough to drive it. So I opted an auto if that's available.

After an hour, refreshing myself with a bath I went out with my sling bag. Google map showed me Gokarna Beach is 2km away but still, it was confusing and with a starting trouble I hailed an auto on my way to the road which shows directions to the beach in the map. Less than 5 minutes, that's it when I landed in the hot sand of Gokarna beach. Few families were there and the beach didn't mesmerize me at all. Moreover, it was crowded with paper and plastic wastes. 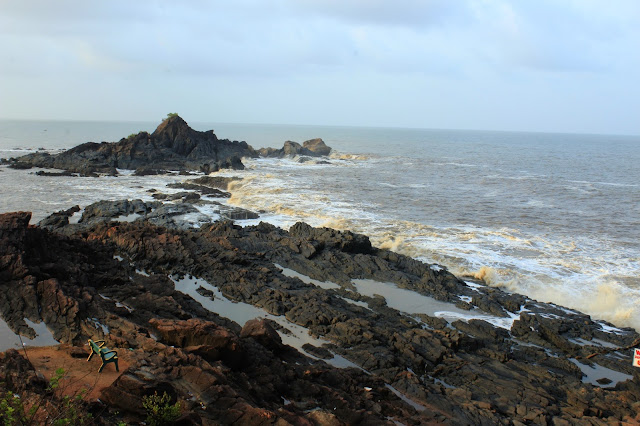 I have a lot of time before I head to my destination so spent time there watching waves and the kids who playing with it. Then after 45 minutes I walked back to the nearby auto stand and asked a driver how much it would be to Kudle beach. 100rs- it was the default. No bargaining - I got in. He dropped me near the steps which lead to the beach. 15 minutes walk through the mud roads and some steep steps, then you can see Kudle beach and its silent waves. I was the first one who appeared on the beach that afternoon. 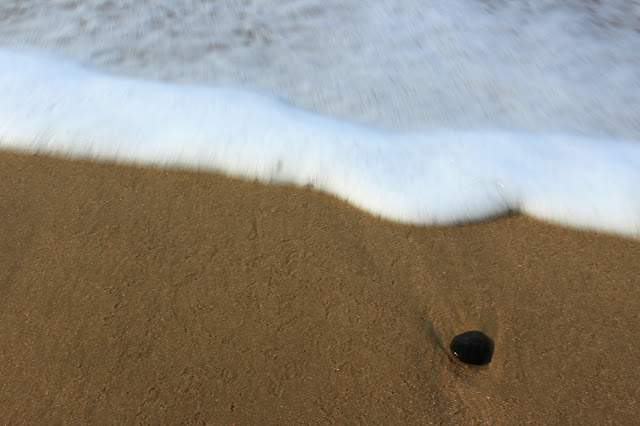 It was calm and serene and no one to disturb you. Spent a lot of time there watching the sea and clicking few snaps. Slowly I saw people are getting in and nearby shacks are moving to live. I walked back to where my auto dropped me and took a different turn from there to the nearby cliff from where I can see Kudle and Gokarna beach at either side of me. Spent time there till 5 PM and decided to walk back rather than hiring any more autos. It was pleasant and the surroundings reminded me of my childhood vacation at Grandmother's home.

Walking slowly and having a lime juice, slowly I reached back my room. Sudden climate change caused a small headache and I slept off for a while and then got up and fresh up for dinner, it was 8 PM. Same Pradeepa's hotel where I saw her father too was there sipping a cold beer with one of his friends, Asked few questions to me and then it was guidelines how to spent next day at Gokarna.

In their words almost all places are alike, I mean beaches. They suggested me to go early to Ohm beach tomorrow morning, if possible by 6 AM. It was the best time. I waved my goodnight after my dinner and left the premises. 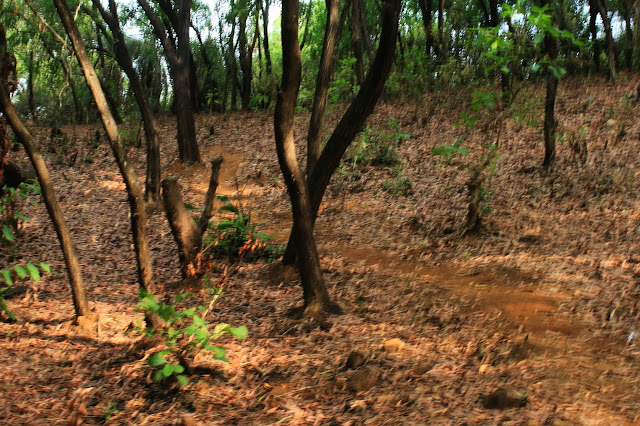 My home stay owner arranged an auto to take me to Ohm next day morning. It was on time when I was ready by 6 AM. nearly 30 minutes ride and I was on top of step from where I can see the view of Ohm beach which is sparkling in the morning glory. Few minutes I stood there and then started walking on the beach. The aim was to find the trekking route to Paradise beach. And there was no one to ask and even after walking till the end of the beach I couldn't find any way to go trekking.

Luckily found a guy who was just out of his bed from the nearby house, he showed the right path and invited him to join me but he rejected the offer. I started walking through the small steps and downs and dogs was everywhere which was I scared of. I walked 15 minutes deep into the woods and realized I lost my mobile signals and no one knows where I left. Last night's headache was taking a toll by the time.

I stood at a cliff to see the upcoming scenes on the shore, it was beyond words but the length I wanted to walk was scaring me and if I am lost, no one can track me. Finally, first time gave up a trekking and started walking back. When I reached nearby the entrance of path where I started, a dog was continuously barking at me and I tried to shoo it away but it was not going away but came around and stood in hind legs and forelegs around my hips. Screaming screaming!! and by the time another one came around and it held me from my back and continued barking. A lady from the nearby house came out listening to my screaming and threatened the dogs with the wooden log. I thanked her and started walking again but the dogs came again. This time she held the first one and gestured me to walk away. I did, no I almost ran! 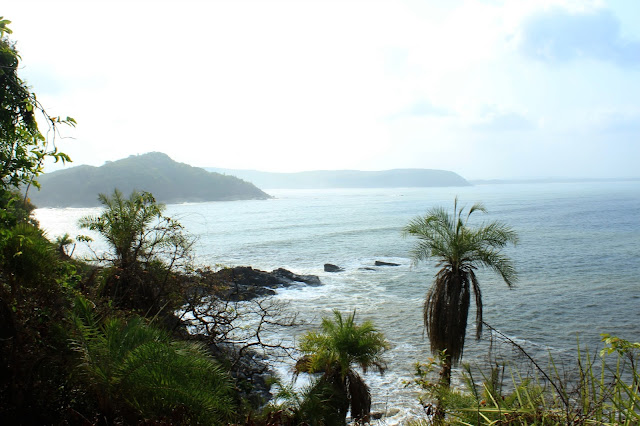 When I get down of the cliff I look back, it was more like a failure and I blamed my headache and mobile signal, Spent few more time at the beach and walked back to where I get an auto to my home stay but Gokarna need one more visit, to complete the incomplete trekking!