Madhura was not in list when started planing for Danushkodi. My friend Krishna suggested me to visit Madhura too on the way to Rameshwaram or way back to home, Trivandrum. And there seems no trains on the day in which I am planing to come back to Trivandrum and I have only one option left and that was to get train from Madhura on next day. So that made up with Madhura. 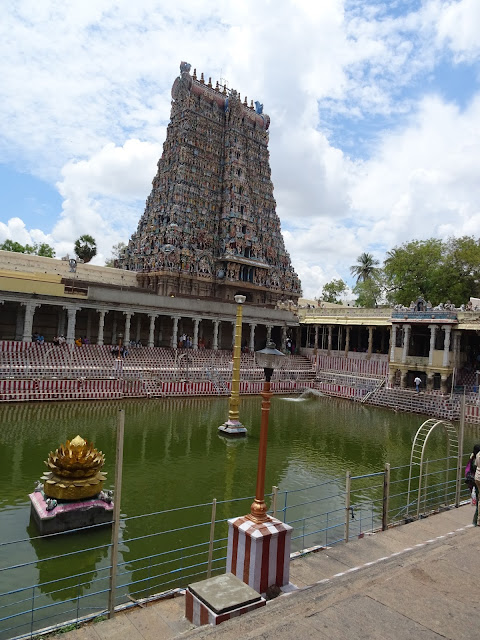 After one day wander at Rameshwaram and Danushkodi, next day woke up early morning and sharp 5AM room boy knocked, no! It was not known, he was thundering the door and ringing bells. It was a 24 hour checkout hotel and still I asked 30 more minutes as the dawn is still dark and I cant go out in that darkness. But all efforts was in vain and I packed my bags and left room and waited at hotel reception 30 more minutes. 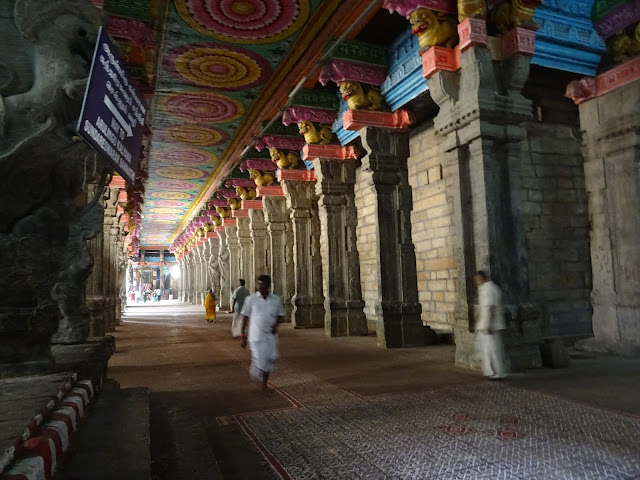 I could see the spreading color of Orange in eastern horizon. I took my back pack and started walking towards Agnitheertham for my sunrise. Devotees was crowded and waiting for sunrise dip. And the moment the sun appeared along with clouds, the shore was roared with sounds of chants of names of Lord. 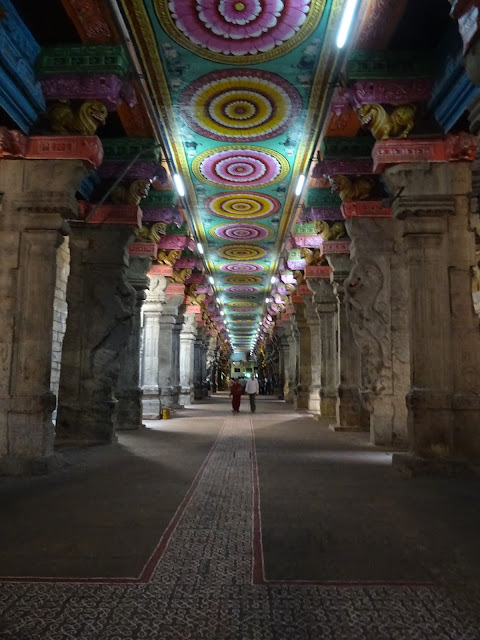 I waited few more minutes and then started walking back to the near by Bus stand and got a an Auto rickshaw to Rameshwaram bus stand. There was one bus was ready to off to Madhura. The name board was in Tamil but still I double checked with the conductor. It started in less than 10 minutes and one more time I crossed Paamban bridge. 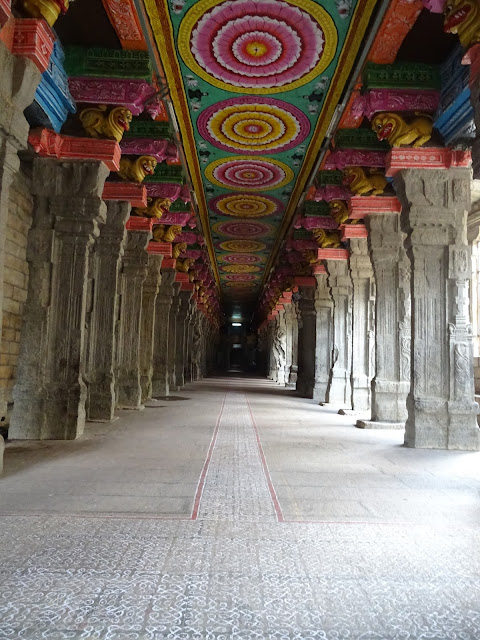 It was 4 hour journey in bus to reach Madhura. I slid my bag to one side and leaned against the glass wall for a better sleep. Slowly the weather started changing to super hot and I woke up to the crowdy-dusty morning of Madhura. In between Driver and Conductor get familiar to me as I was asking them how to reach Madhura Meenakshi from the bus stand. 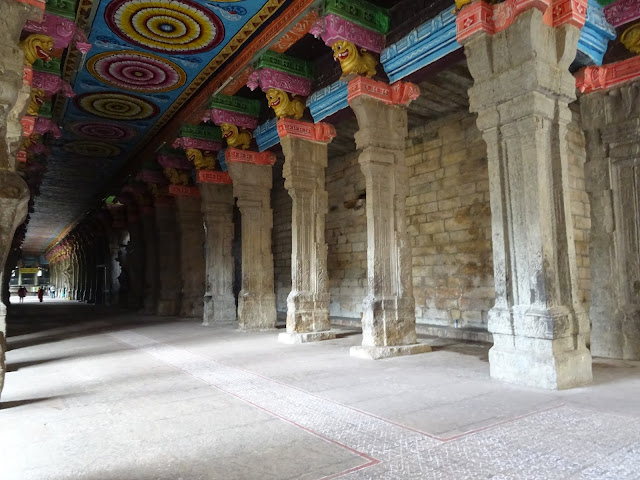 Soon the bus reached the bus stand, conductor showed me the bus in which I can get down near to temple. It was hardly 20 minutes journey in next bus and on the way, a girl who sat close to me was asking my whereabouts. She was asking about my previous journeys and how I am travelling alone and what I am doing. She helped me to get down at the right place and waved at me when the bus headed forward. 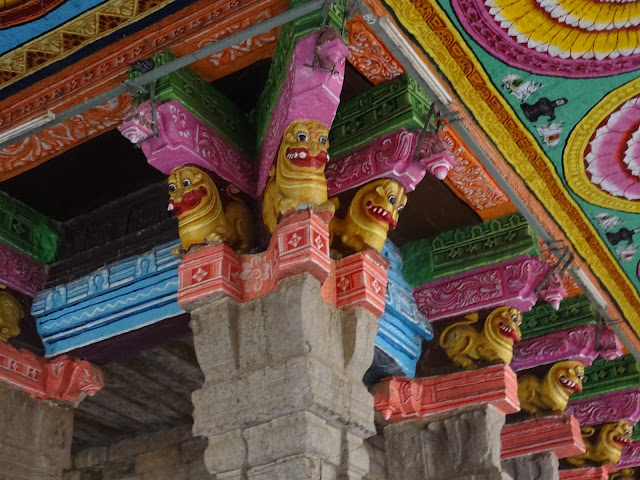 It was then walk through the market road of Madhura. My either side was filled with fruits and vegetables and soon it replaced by garments. 1 kilo meter walk ended at the north tower of temple. By the time I was bathed in sweat. My back pack felt heavy and first thing I wanted to check was, where I can keep this? 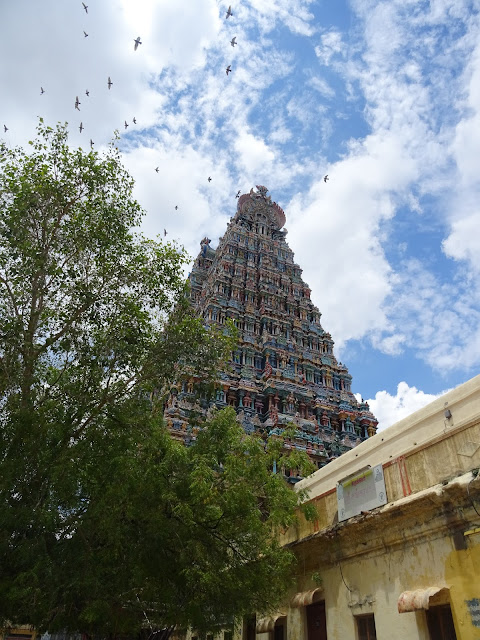 A man who run shop infront of the temple helped to me to find the cloak room in temple. Checking bags was strict and what disappointed me was "Photography Prohibited". Innocent me entered the metal detector with my cam on and they caught and tell me to keep it outside, I came back and put the camera bag in my back pack, in cloak room. But for a try I kept the camera in my bag only but this time they didnt check my sling bag. 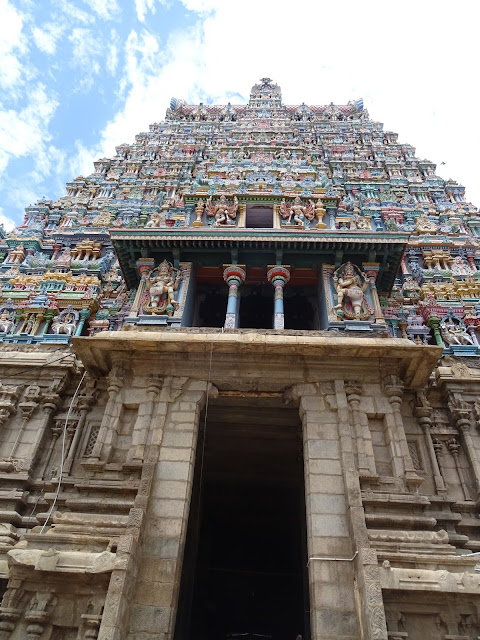 I went into temple without a guide and it was much fun to roam around from tower to tower and lost in between. Beautiful murals was there on wall and ceiling but I didnt have dare to get my camera out of bag but clicked few in my mobile as everyone was doing the same. 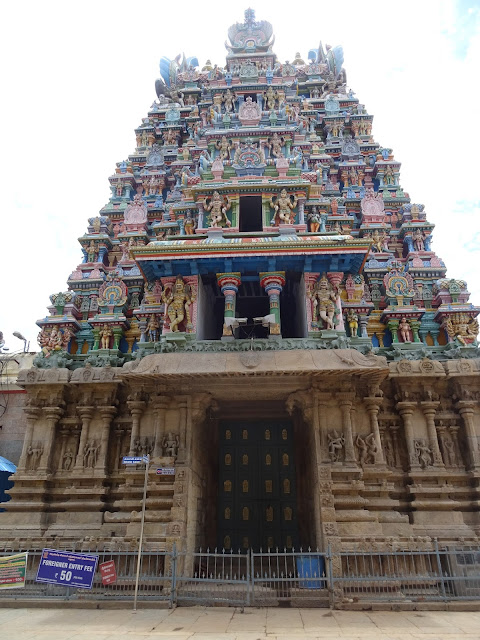 Meenakshi Amman Temple is a historic Hindu temple located on the southern bank of the Vaigai River in the temple city of Madurai, Tamil Nadu, India. It is dedicated to Parvati, known as Meenakshi, and her consort, Shiva, here named Sundareswarar. The temple forms the heart and lifeline of the 2,500-year-old city of Madurai and is a significant symbol for the Tamil people, mentioned since antiquity in Tamil literature. Though the present structure was built between 1623 and 1655 CE. It is said that the temple was actually built in the 6th century BC by survivors of the Kumari Kandam. In the 14th century, the Mughal Muslim Commander Malik Kafur plundered the temple and looted it of its valuables. It was rebuilt by the Nayak ruler Vishwanatha Nayakar around the 16th century. It was Vishwanatha Nayak who rebuilt the temple in accordance to shilpa shastra. It houses 14 gopurams (gateway towers), ranging from 45–50m in height. The tallest is the southern tower, 51.9 metres (170 ft) high, and two golden sculptured vimanas, the shrines over the garbhagrihas (sanctums) of the main deities. The temple attracts 15,000 visitors a day, around 25,000 on Fridays, and receives an annual revenue of  60 million. There are an estimated 33,000 sculptures in the temple. It was on the list of top 30 nominees for the "New Seven Wonders of the World". The temple is the most prominent landmark and most visited tourist attraction in the city. The annual 10-day Meenakshi Tirukalyanam festival, celebrated during April and May, attracts 1 million visitors.. 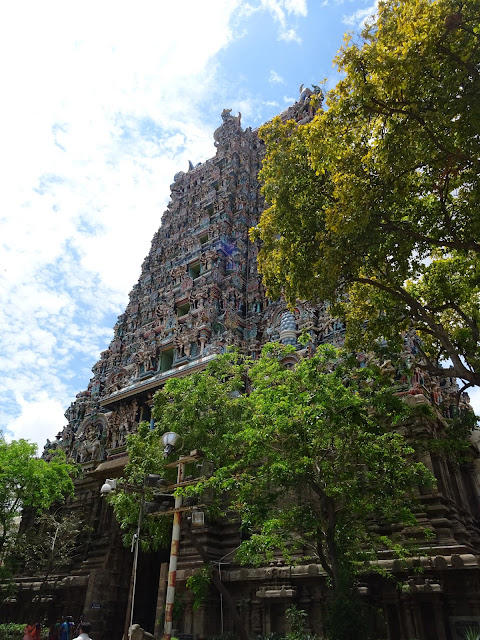 And the crowd was not that bad when I get into the eastern entrance. I brought prasad (laddu) and ate it sitting calmly at the steps towards the pond where the lotus is made of gold. I didnt went for a darshan as here also they have a que of 50/100rs each and I really dont like visiting the deity paying a fee. 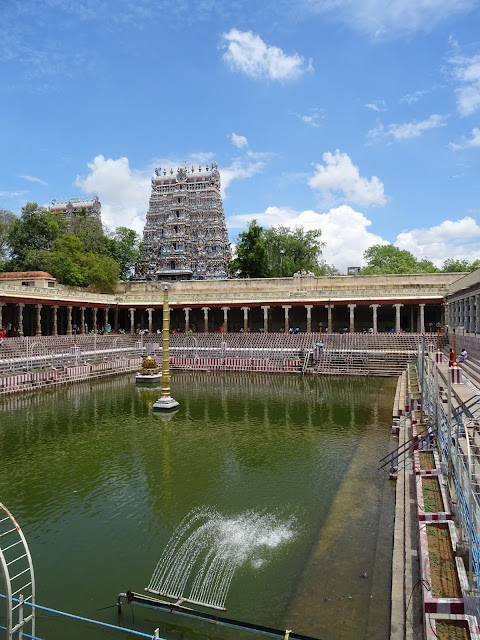 The temple is surrounded by gopurams (gateway tower), There are 14 gopuram the tallest of which, the famous southern tower, rises to over 170 ft (52 m) and was built in 1559. The oldest gopuram is the eastern one, built by Maravarman Sundara Pandyan during 1216-1238 Each gopuram is a multi-storeyed structure, covered with thousands of stone figures of animals, gods and demons painted in bright hues. 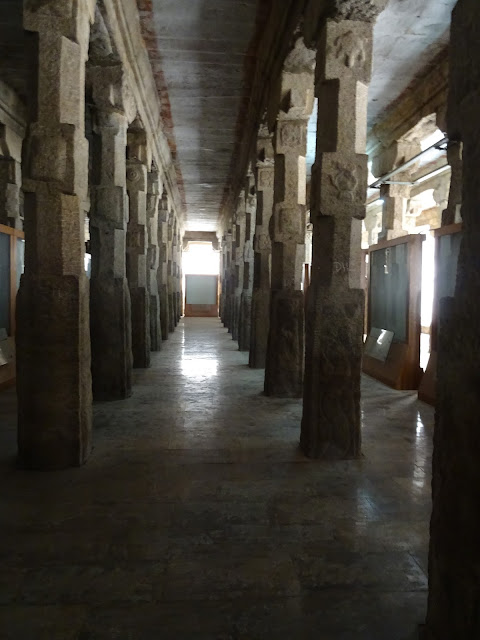 The outer gopuram presents steeply pyramidal tower encrusted with plaster figures, while the inner gopuram serves as the entrance to the inner enclosure of Sundareswarar shrine.

While going out I saw the board to the entrance of Thousand pillar hall. It was not in list and new to my knowledge. There we have to pay 10rs for entry and 100rs for camera but I refused to pay that amount as I thought of some HTC (my mobile) clicks there. 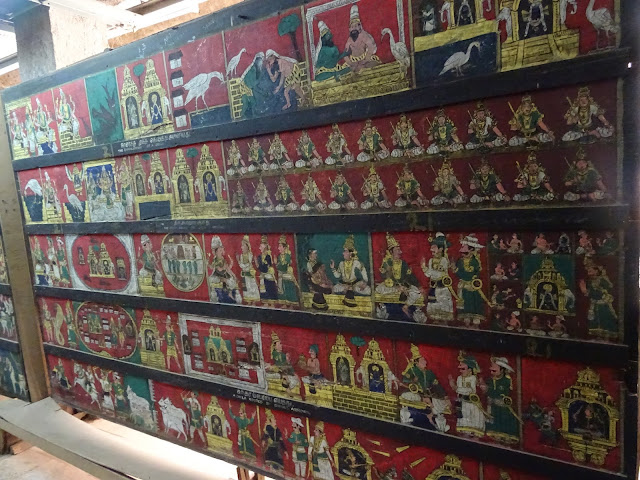 Meenakshi Nayakkar Mandapam ("Hall of 1000 pillars") has two rows of pillars carved with images of yali (mythological beast with body of lion and head of an elephant), commonly used as the symbol of Nayak power. It is situated to the north of Sundareswarar flag staff hall. The Thousand Pillar Hall contains 985 (instead of 1000) carved pillars. The hall was built by Ariyanatha Mudaliar in 1569 and blends engineering skill and artistic vision. At the entrance of the hall is the statue of Ariyanatha Mudaliar seated on a horse-back, flanking one side of the entrance to the temple. The statue is periodically garlanded by worshippers. Each pillar in the hall is a carved monument of the Dravidian sculpture. The more prominent among the carved figures are those of Rati (wife of Kama), Karthikeya, Ganesha, Shiva as a wandering mendicant and endless number of yalis (mythical figures of lions). There is a Temple Art Museum in the hall where icons, photographs, drawings, and other exhibits of the 1200 years old history of the temple are displayed. Just outside this hall, towards the west, are the Musical Pillars. Each pillar, when struck, produces a different musical note (Before I saw this in Vittala Temple, Hampi).

After the pillar temple I stepped outside of the temple for my next destination in Madhura....