Two months of waiting...
Yes! For shower of rain over the land of Gandikkotta, hoping to get a better climate over there. As usual planing and train ticket booking started a month ahead and then came a point where I have an extra day in hand which I can spent either at Train or at Chennai, for an easy route way back to Trivandrum. 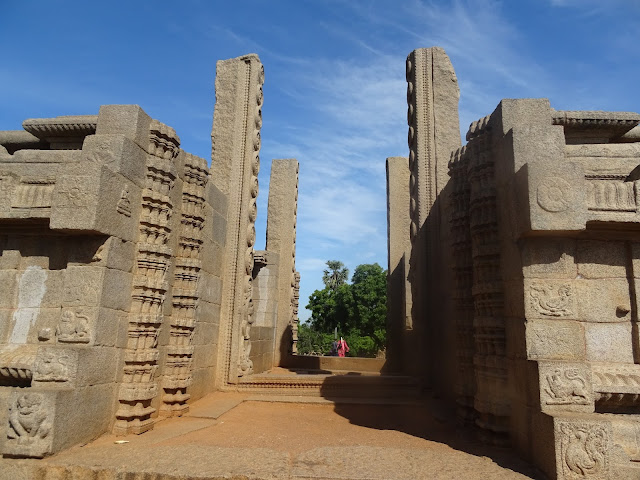 Started looking for places which I can visit in a day time from Chennai (nah! I am not intesteted in City malls or beaches in scorching sun) Map stretched infront of pointed to destination, 70km away from Chennai- Mamallapuram a.k.a Mahabalipuram! The land of Pallavas! No second thoughts and booked an evening ticket from Chennai to Trivandrum and enquired about rented cabs from City to Mahabalipuram. All set and the day reached after Gandikkotta and Belum cave visit. 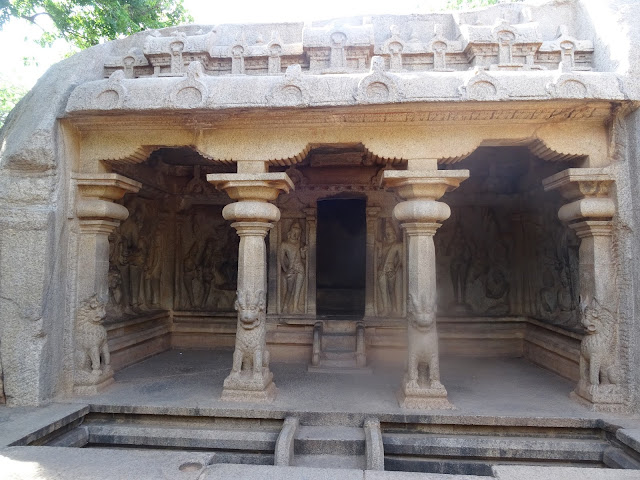 Train was sharp on time from Tadipathri station to Chennai central station. I did a change from train itself and brushing from station rest room. It was early morning, 5AM! Another one more hour waiting for Driver, Rama swamy who was replaced by last minute chaos. Yeah! The first cab I booked later only realised that its Sunday and their cab wont be on service. Then running here and there and calls, got one cab finally. (A rented cab is not really needed, you can get buses frequently from Chennai to Mahabalipuram, but only if you have enough time for a local transportation) 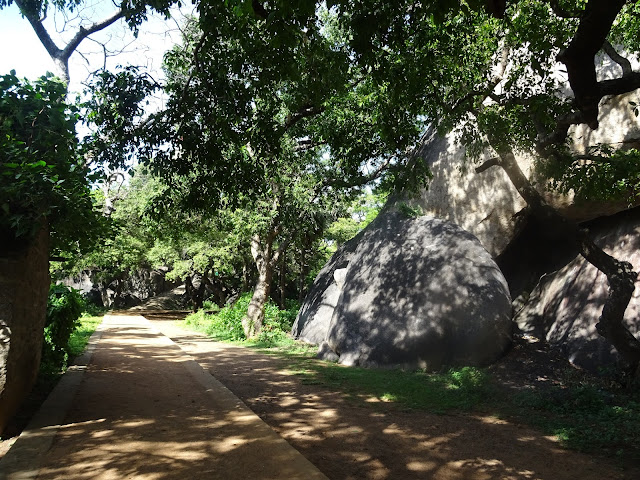 Driver came litle late by 6.30AM and by the time the traffic was slowly picking up the speed and he was saying about that. Well! It turned to be our ice breaking for the journey. You know, travelling in cab without knowing or talking or each other will be too boring so I started talking about my journey and he about his life at Chennai and driving career. 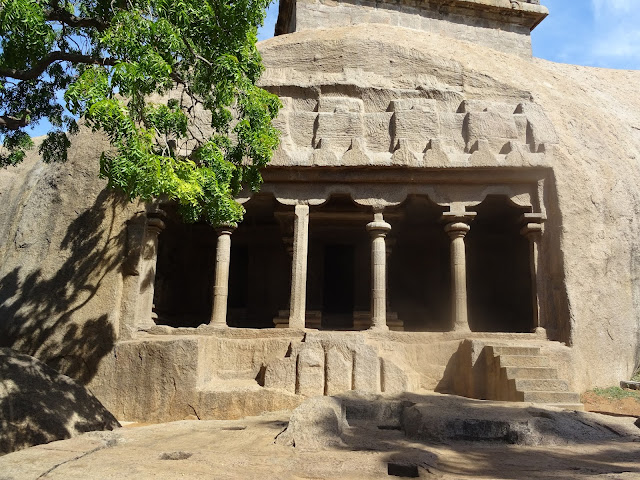 In less than 2 hour we reached Mahabalipuram, which was waking up. He stopped the vehicle infront of a hotel and asked about my breakfast. It was too early for me, so I prefered to roam around once and then have breakfast later. So started from Arjuna's penace. Before that let me tell you, the name versions of Mahabalipuram. It was named as "Katalmalai" which means "The land between the mountain and the sea" and later it got another name "Mamallapuram" means "The land of the great wrestker". Pallavan King Narsimhavarman ruled here during 8th century and known for his strength has relation with this name. The third and final name is "Mahabalipuram" means "The land of Mahabli". Histiory says, he was the grandson of devoted Prahlaada. 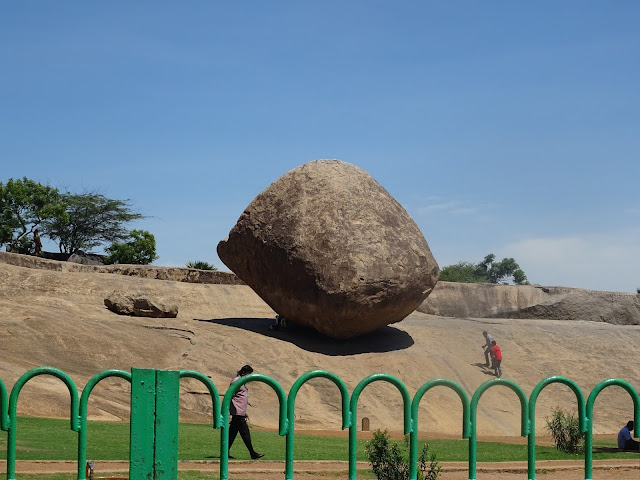 So where were we? Ha! Arjuna penace - one of the best rock cut sculptures in India which sculptured in giant monolithic stone which represents Descent of Ganges from heaven to earth led by Bhagiratha. You should be careful to enjoy the beauty of the rock cuts here ;) Ah! Its nothing as you think now, you have to stand at the side of the road and watch the sculptures. 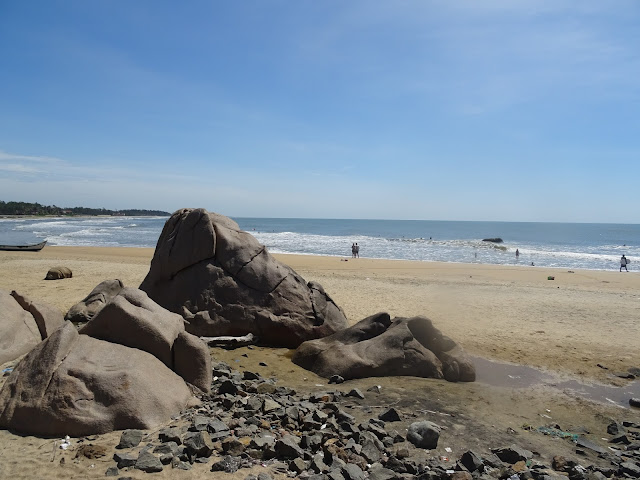 I stepped through the sides of Arjuna Penance and entered to Hill top village. I choose my own way to find path in Hill top village where you can see alot of rock cut temples (which seems like it was served as a school for young sculptures  with different architectures and few are half finished). One of them is Varaha Temple. The front columns have finely carved lions in a sitting posture. 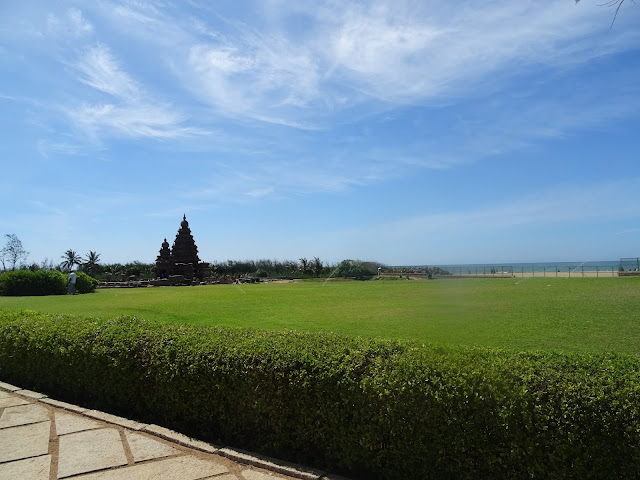 The heat was tooking its toll and I didnt take an effort to vist the giant Balancing rock (Which is also knows as Krishna's butter ball) It was really amazing to see a giant rock situating at the slope and balancing in a very small diameter. From there I took a turn to visit other parts of that hills and passed by the Light house which is sitatuting in the same Hill top village.

After 2 hour of sight seeing I came out from to see our "Saarathi" and found him having breakfast from a street shop, near by Arjuna's Penance. I too joined him for my breakfast (He was thinking I wont love the food and thats why didnt suggested me the place but happy to see that I too loved the food) 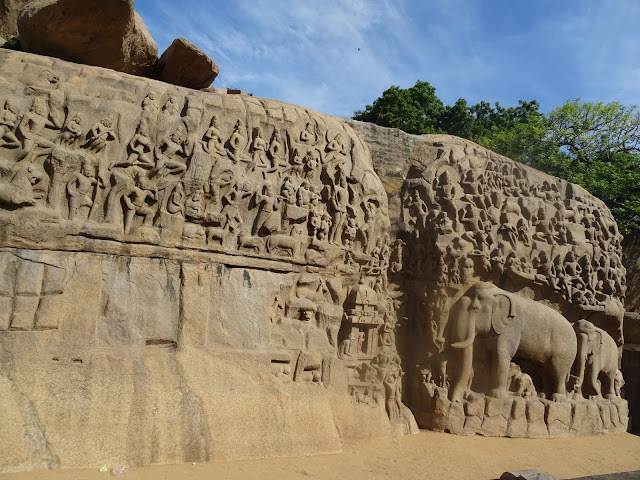 After breakfast we headed to Shore Temple. By the time the crowd was started forming here and there. It was 11AM and the heat was untolerrable. Shore temple was one of the busiest port in South India at the time of its creation, during the reign of Narasimhavamsan II. The name sounds itself as it is close to the sea and yeah facing it!. It has a structural architecure and one of the oldest in South India. Sailors named it Seven Pagodas as this was standing as landmark to them. 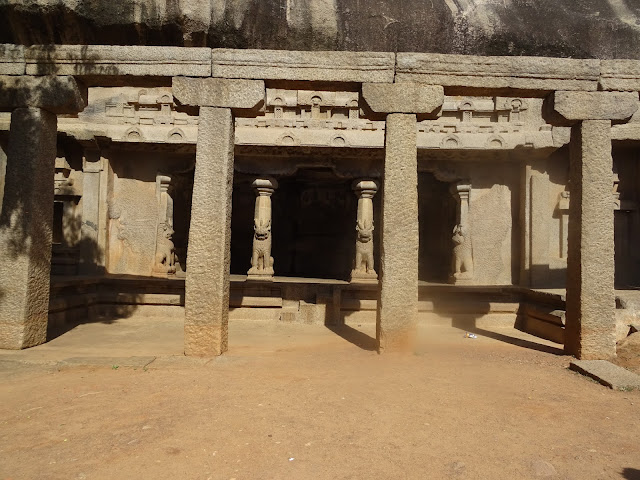 The Tsuname of 2004, revealed other 6 temple structures near by the shore temple, along with many other sculptures. Tsunami couldnt damage much of Shore Temple excpet the the Balipeetam. The temple structre's strong foundation in Granite made them safe during Tsunami. Also it has a beautiful garden around and it was good to see few greenery at that hot climate. 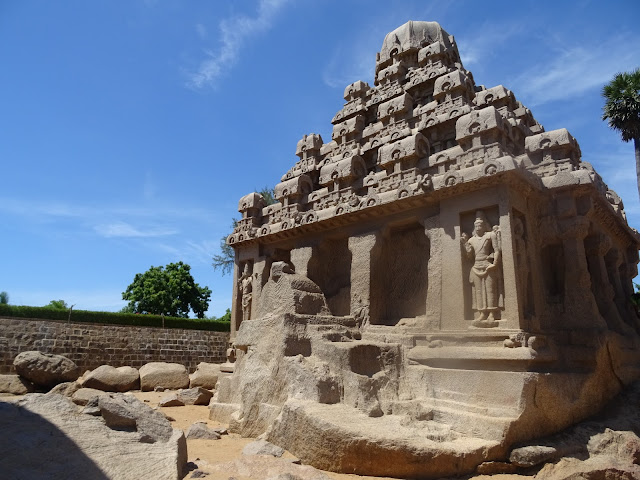 As I mentioned history says this was the land of Prahlada, son of Hiranyakashyapu who killed by Narasimha. People says even the Gods were jealous of the architecture at Mahabalipuram and created floods and that caused many parts of the city submerged in the see except very few which is available to see now. 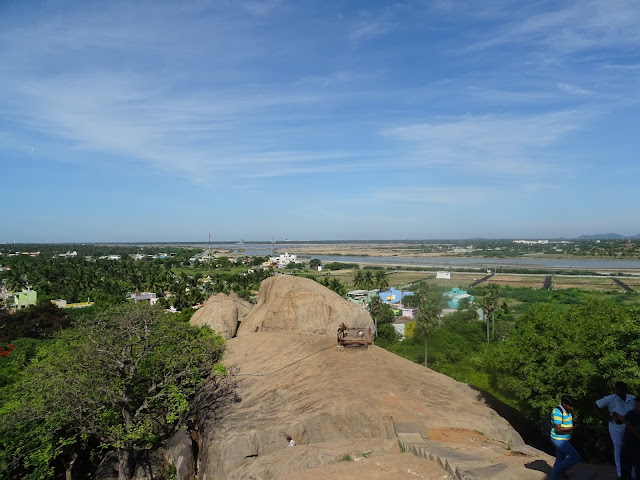 After shore temple, next destination was Panch Rathas (Same entry tickets of Shore Temple you can use here, so dont tear it off after the Shore temple visit ;) )

As the name says its 5 structure in stones or monolith which resemebles a Chariot. The construction was not completed as it was initiated by Narasimhavamsan I and he died before the completion of the architecures. Few says it was the sculptures which young sculptures practiced of that era. It has no religious significance and it remained unfinished. 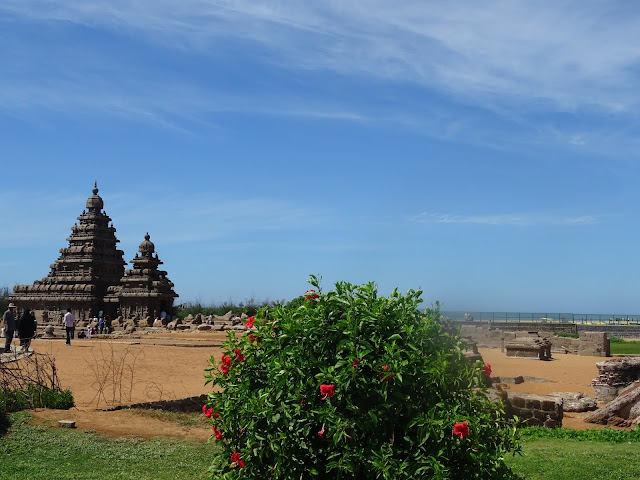 Each Rathas named after pancha pandavas and their wife Droupathi depending on the size of structures - Dharmaraja Ratha, Bhima Ratha, Arjuna Ratha, Nakula Sahadeva Ratha, and Draupadi Ratha. The uncut and unfinished parts of rock are still visible at the bottom of rathas.

I was completing my visit at Mahabalipuram with next visit to Tiger Cave which was few kilometers from Mahabalipuram. On the way I could see cyclists (who happen to be tourists to explore the land in an easy way, but the heat!! :( ) We reached the Tiger Cave in 20 minutes from Mahabalipuram (Its on high way on the way back to Chennai). It got its name due to the Tiger carving at the mouth of the cave. Its one of the picnic spot in Mahabalipuram and close the the shore of Bay of Bengal. 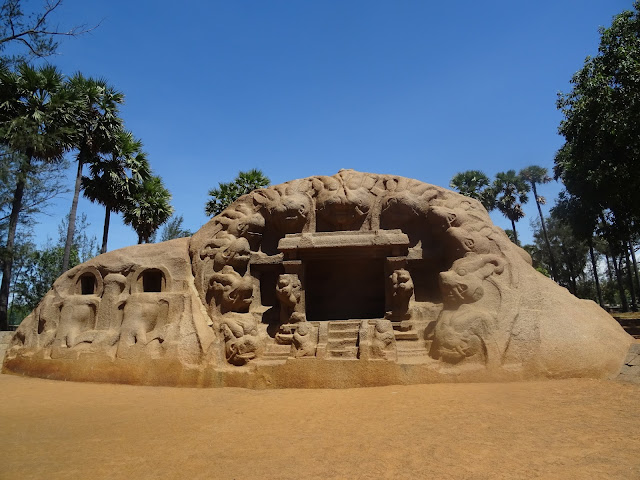 After the cave visit, I tried to explore the sea shore with out my sandals but soon after the my first two steps and I came back and put my sandals on (I told you its soo hot there!).

When I came back to my vechile by 12:30 Noon, My Mahabalipuram exploration was getting over and headed back to Chennai to catch my train back to home and see other attractions on the way...