Well, it was my first step out to North India and first time boarding flight for my solo journeys. Even the main destination was Orcha, I happen to see only Delhi International Airport near by. When I set out my journey I usually don't announce it in social networks as I have belief that - "What I announce as my wishes are never goes true". But this time I have to coz I needed the tickets for Freedom parade in Red Fort. 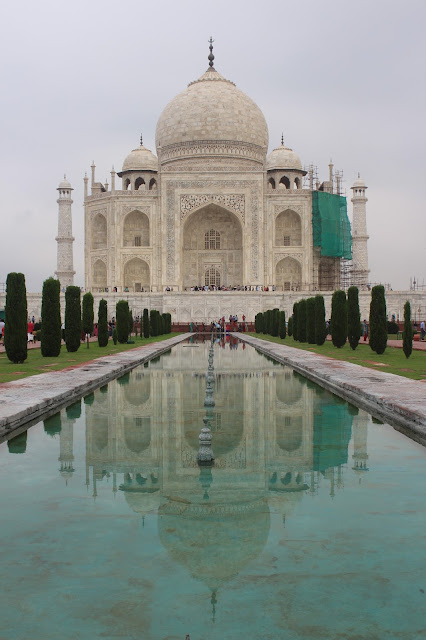 Then it was suggestions to inbox for the places to visit in Delhi which I don'y like as I have my own choices and accept those lines from friends who knows my taste. One of them pointed out to Taj at Agra and insisting to visit it. The same reason as I mentioned above I was not interested to see that world wonder. First things is I was never impressed with the love story of Shajahan-Mumthaz, in fact I never get any reads of those love trails except Taj. 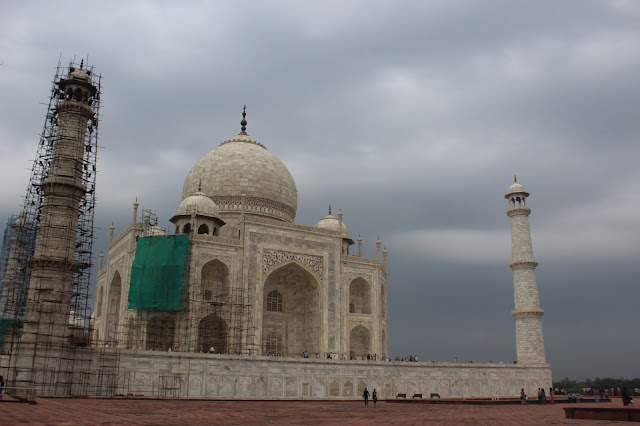 After planing and re-planning I have to choose Agra as a destination to make up my 5 days trip with one day at Delhi and another day at Orcha. 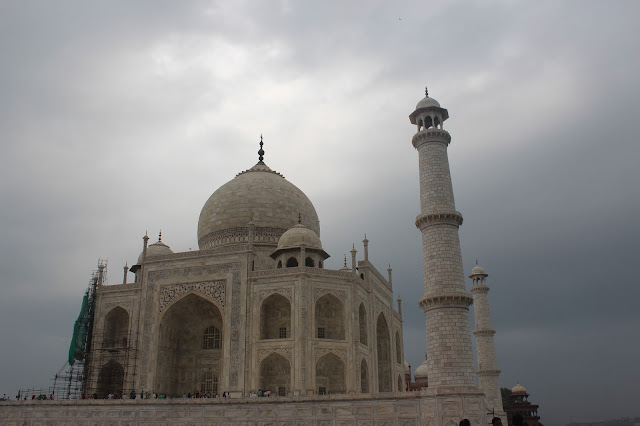 As like you all I have seen so many pictures of Taj Mahal since Childhood. The white-marble structure and its architecture started attracting my wander lust when I started hunting down the travelogues of Agra. All those visited have mesmerizing memories of their visit and they said literally their jaw fell down seeing the wonder. Anyways, as a person who not believing in reviews not believed this too and waited for my turn to start wandering in Agra. 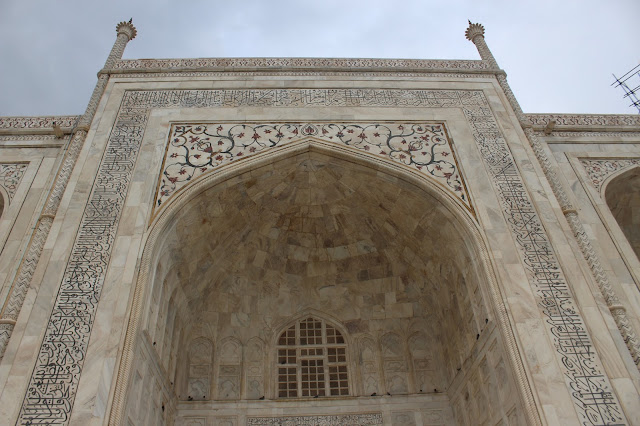 As planned my auto driver reached railway station early morning 6AM and he has instructions all the way till I reach south gate. He promised me that there wouldnt be much crowd to get a ticket and yes, it was true! Crowd was comparatively very less , not more than 250 person who standing in 2 Que! (I am serious that the crowd is not that big compare to other times in Taj). I got my tickets and wisely ignored a guide who came after me to help out. After the primary checking on my bag for foodies and other prohibited things, I was free to wander around. 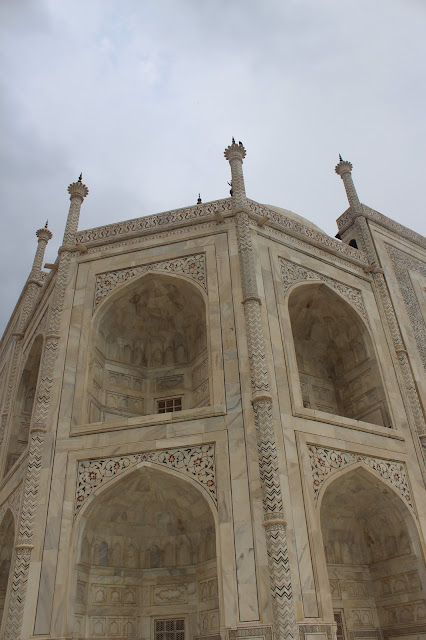 As I started approaching the gate, suddenly the feel came to my mind that I am about to see one of the world wonder! I wanted to see it in a straight glance so for the same reason I didnt turn to my left where I can see the dome of Taj and gone to the front of gate through where the visitors will be blessed with the first view of Taj. And when it came my turn, I was dumbfounded of what I saw in my front! 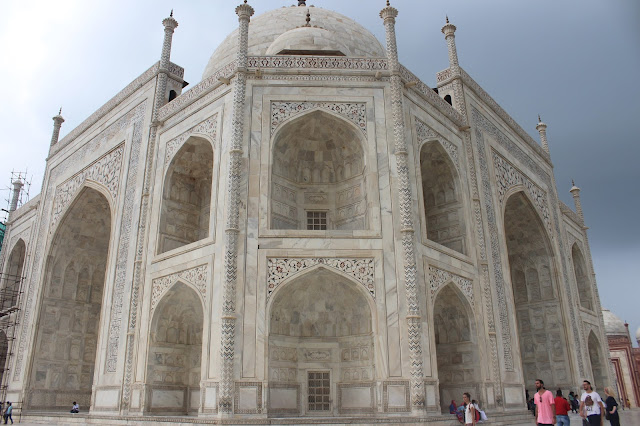 Yes! It was my first expression to the "white"-wonder but it was not white at all. What was my feeling was not drop my jaw as everyone else there did or as those who wrote in their travelogues. But I feel pity on that monument which was ruined by all of us. Next thing is I don't like to click monuments with large crowd and here it was flooded with visitors and very much disappointed for the people in my photos. That disappointment I make up with a visit to Mehthab bagh from where I saw the wonder peacefully without any crowd. 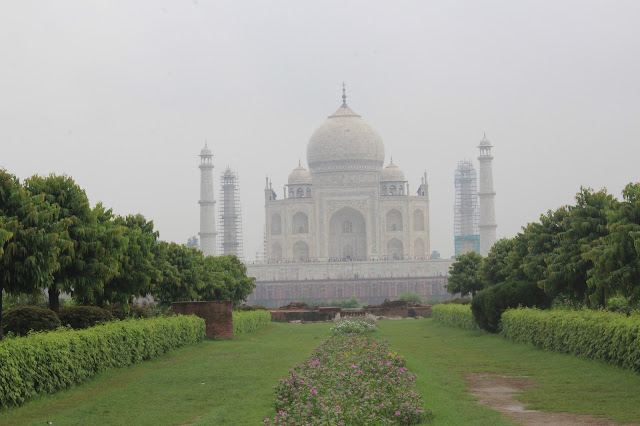 Taj Mahal is in a state in which we can call it yellow-wonder. Restoration process is going on but its not seems effective of what I have seen there. More than the architecture I was expecting a white structure there, there I was disappointed, not what Taj is. At the end of last century only our authorities realized what we are doing to the monument. They are in action and the restoration programs are one of that and also they stopped traffic 2 kilo meter away from the monument. 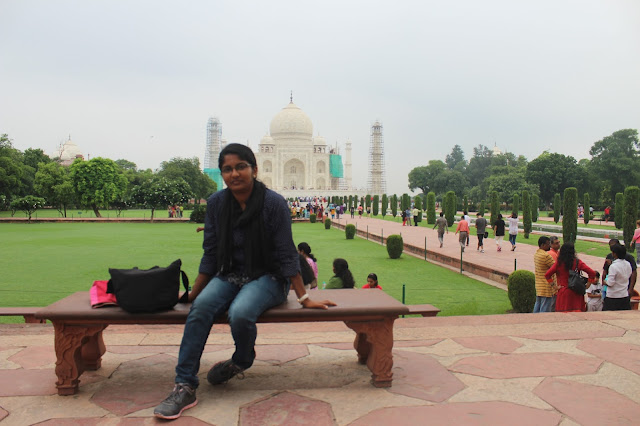 Taj is a architecture wonder but most of the lakhs of visitors don't know its importance. They are coming to see a marble building and they are going against of what it instructed there. Inside the main mausoleum but people are not aware of why it is. There is paintings are done on walls and floors and mobile/camera flashes will damage this. This is the reason why its prohibited but still there are visitors who click the tomb and surroundings when security turns his neck around. 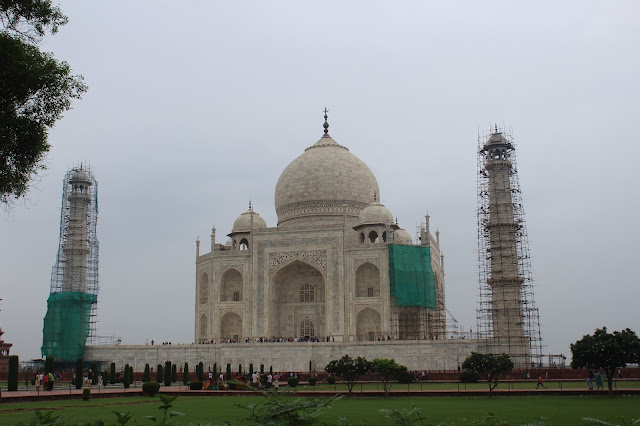 Here is a request to the travelers who rush to this monument, please follow the rules. Not only here but wherever you go to visit historical monuments. Also don't give false expectation to those view your photographs by editing and coloring the pale yellow of Taj to white.