Its late to write the second part of Rameshwaram journey and if you are one among who missed the first part, you can read it here. 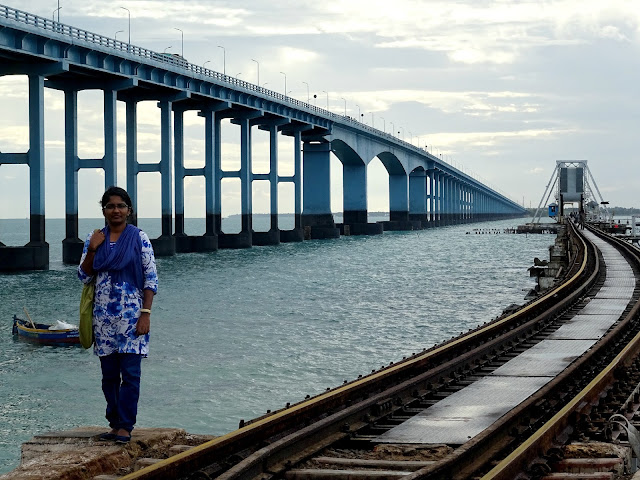 Doordarshan tower was a landmark to show how much distance we have to cover to reach the main land and it was close to 2PM when we reached back and Azad's wife was keep on calling to arrange our lunch. Azad was the master planner in this journey. He said we can visit the Vivekananda Memorial first and then we can go to home and then come back to visit Pamban. As he is more wiser than me on local geography, I agreed to his suggestions. 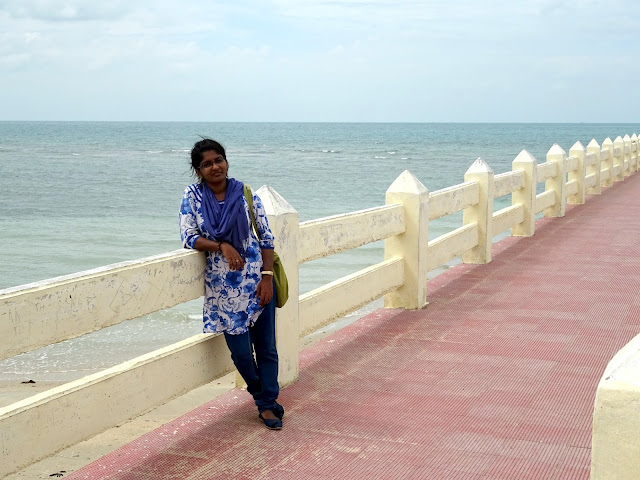 Towards Ramanathapuram while we were heading in scroching sun to visit Vivekananda Memorial in Kundunkal, one board strike my eyes. "Vellundi Theertham". I called out Azad's name for a stop. I asked him whether this was a "must visit" place. He said we can visit it on way back. But instantly he changed his own words and said "Lets move to there now else it might be too late to visit the place". From main road he took a U - turn and which was turning to a concrete road and ending at another beach which was named "Vellundi Theertham". Apart from me there was only one family to visit the place.

As per Ramayana this was the place where Rama dip his bow in sea water to quench Sita's thirst to make this Theertham (well). You can see a small well close to the sea and for my bad luck the family was too busy to take family snaps around the well. Waited nearly 30 minutes to take photo but Azad's daughter is getting tired on this long journey. So I wrapped up my camera bag to head to next destination. 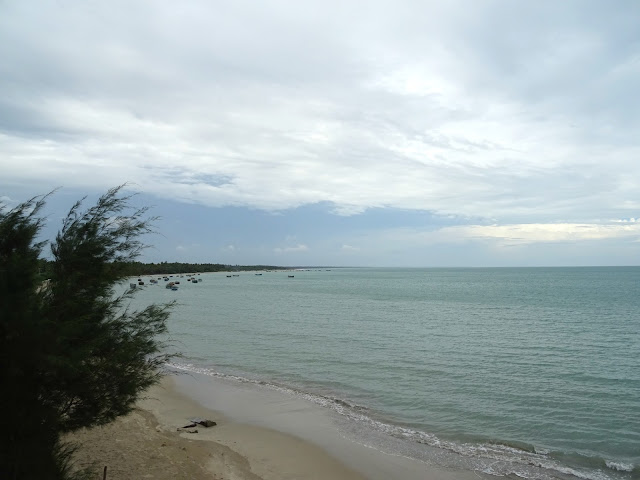 From there it was again another 8 kilo meter to Vivekananda Memorial. Towards Pamban its on your left. Road is not that good but approaching the destination, you will get a panoramic view of Pamban on your right side and a orange color building on your front. 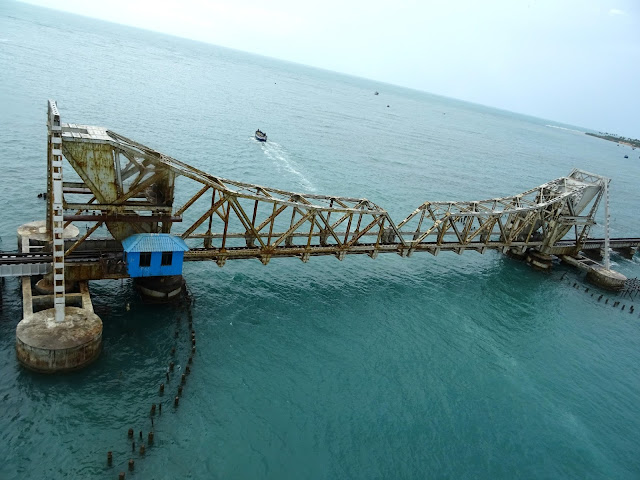 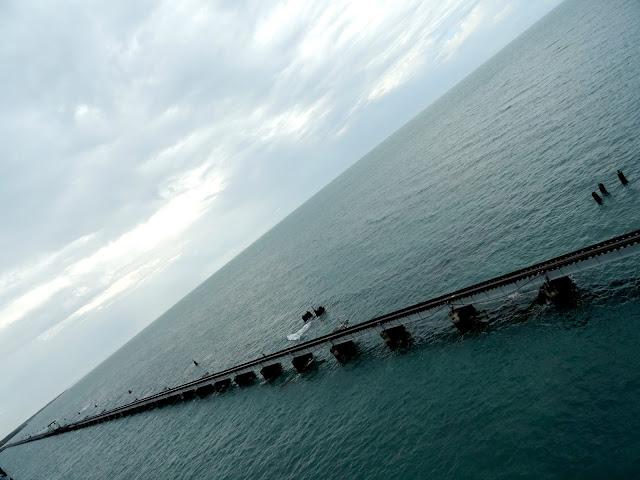 As my friend Krishna who was a previous visitor of Rameshwaram, suggested me to not to miss the beach at the back side of the memorial. Serene - That was the word best to explain the beach. Low tide and complete silence. Not at all crowded! Spent few times there and left to Azad's home. On the way we crossed Pamban Bridge. It was an amazing experience for me - crossing 2.5km by road through sea :) (might be childish But I am!) 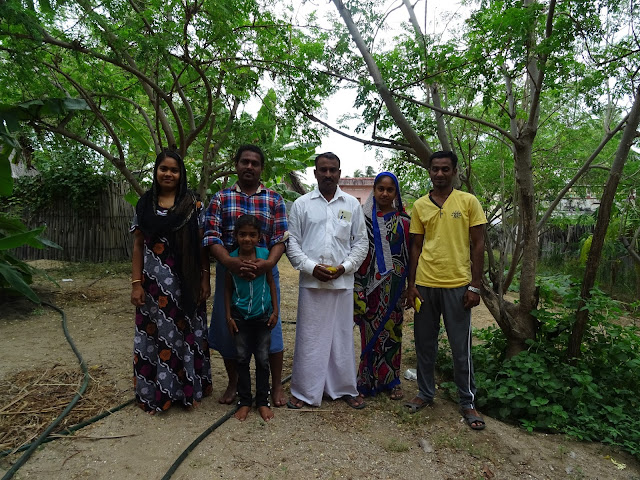 Azad's home was at Mandapam which was at the other side of Pamban Bridge. Our bike was going through few zig-zag roads and finally that road ended in another clean street where a window from home was opened towards us. Two smiling faces appeared on door. Azad's wife and mother. It was first time for me interacting with local family during trip. But what I got was a warm welcome. Azad's mother was keep on asking how I came alone long way from Trivandrum and Azad was replying that I travelled all the way Odisha alone then why cant she this short distance! 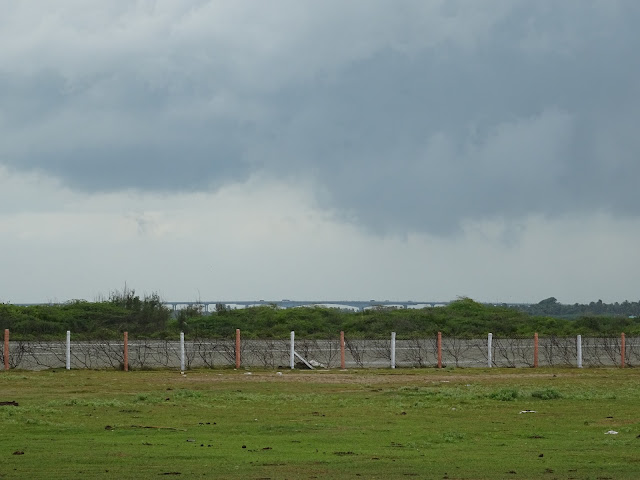 A tall and lean guy appeared in track suits and said "hi". It was Azad's younger brother Sadique who also was completed Marian Engineering and hunting jobs. He was a best companion through out the lunch. Then next came a man in white-n-white (exactly look like a politician and he is!). Azad's elder brother was that and he is running a shop near by but more in to politics. He came home for lunch and was waiting for me. Behind him appeared another face. It was his wife and then kids came from here and there. Azad's father came and left like that. I forgot for a while that I am on a trip, it was more likely a family visit. 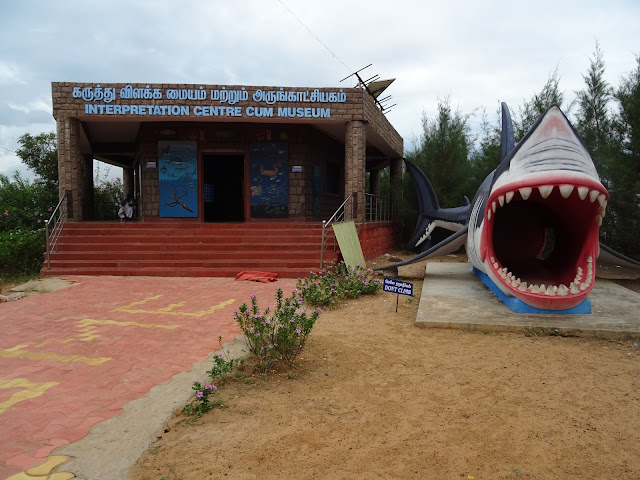 Knowing my diet, Azad's wife prepared a long menu of veg dishes and all of that was delicious and as desert they served Pumbkin sweet and that became one of my favorite. After the lunch I saw a greenery through the kitchen door and asked their permission to get out through that door. To my surprise I was out into a small vegetable-fruits farming. For a small family whatever needs was there, it was there. First time I was seeing Pomegranate on a tree and few floral plants was there too as Jasmine. 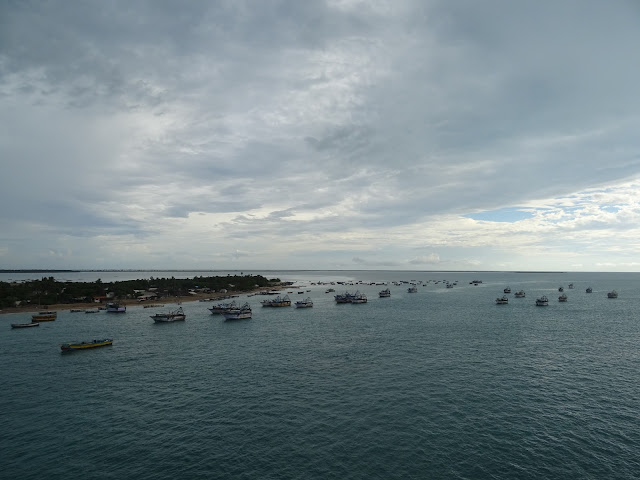 Azad's wife was pointing to the running pumpkin leaves saying "From this we made you the sweet". May be in my Rameshwaram trip that home was one of the nice place where I completely forgot being away from home. In less than 1 hour we again started back to Pamban. Waved bye to everyone and they said to visit often and I don't know when I will be visiting next time. It was all good.

On the way to Pamban Azad gone via there boat jetty from there we will get another view of Pamban. But unfortunately it started raining again. We spent few time in a petrol bunk and when it slow down, we started to Pamban again. Azad stopped the bike where the cantilever bridge is opening for ships. When buses crossing the bridge, it was shaking and vibrating. Azad's daughter was full on energy. 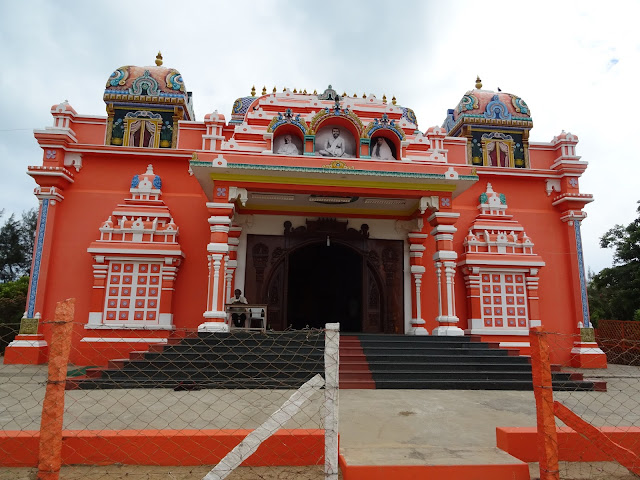 This bridge is opened on 24 February 1914, it was India's first sea bridge, and was the longest sea bridge in India until the opening of the Bandra-Worli Sea Link in 2010. The rail bridge is for the most part, a conventional bridge resting on concrete piers, but has a double leaf bascule section midway, which can be raised to let ships and barges pass through.

The real view of the bridge was from the downside. Fishermen living there, it was too Azad's suggestion. We can see both bridges parallelly. As watching the sea, Azad asked whether I want to walk through the rail bridge till the ship crossing. With out a second thought I nodded and we started walking through the rail. In few minutes we heard the railway workers who is doing some repairing on bridge in ship crossing hauling and making sounds. I completely ignored it and then suddenly Azad called out from my back side "Sajnaa its train!!"
Either to jump off to water or to hit by train. But with both options death is sure. So chose to run, what if luck favors. I could see train in distance coming slowly and Azad's daughter was the first one who reached the land first and then me and Azad was close to close. Micro seconds difference we landed to the main land and train crossed us. sigh!! 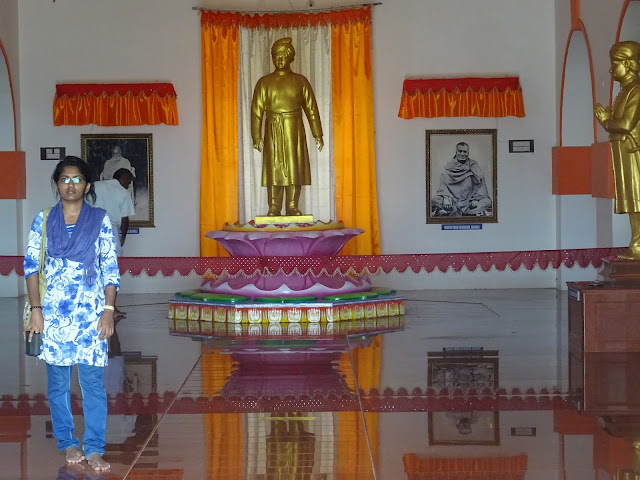 It was fun but tooo dangerous.  Azad's dauighter was continuously laughing on how we escaped the train hit!
It was getting dark and by then we returned from Pamban and visited Lakshmana Theertham (Another temple) which was close to Rameshwaram Bus stand. Next was seeing floating stones. Azad don't know the place. So we took a break in his friend's shop and asked him. Azad got the route, asking one each on the road finally we reached Panchamukhi Hanuman Temple where floating stones are kept for devotees and visitors. It was a scientific wonder and it was proven since our old age architects that this stones even prevent earth quakes.
Red Kumkum was fallen on the stones and people were putting coins to the water. We returned from there to Kalam's house. Photography was completely prohibited here and no entrance fee. Academic and professional expertise of our missile man was show cased over there. His brother is in charge of this place now. Seeing all those frames and pictures we cant blame the respect our former president deserves. 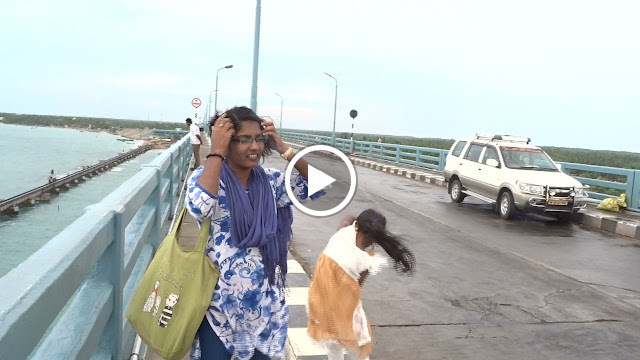 It was dark by then when we get out. Azad showed me near by mall where I can get some souvenirs and sweets. When I choose 2 box of chocolates and some show pieces, Azad billed those items as he will get few discount from there. I gifted one box of chocolates to Azad's daughter and before they leave me to my hotel we had a quick visit at Ramanatha Swami Temple. As it was post - "Deeparathana" there was not much crowd but I didn't like the system of line up for those who pay 100rs, darshan at the earliest and for those cant pay this amount stand in the Que little longer. Anyway we didn't paid any amount and left the temple in 1 hour. Photography was prohibited here too. More than the architecture, the paintings attracted me here. An Elephant was standing at door to wish the devotees on charge of 10rs. I watched it and then left the temple with a heavy headache.
Azad dropped me at hotel and waved bye. He was keep on saying next time dont stay at hotel, they have house to welcome me. I simply shook my head and smiled.

Journey continues through the sunrise of Rameshwaram sunrise and Madhurai visit....