Murudeshwar - Truly "Unforgettable" in all sense

Early morning vacated retiring room of Uduppi railway station and started waiting at platform for my next train to Honnavar, Yeah, my destination was Jog falls. But may be my "time" was not good, train was delayed by hour by hour and finally it was late by 2.30 hours and by then I lost the hope of meeting Jog. 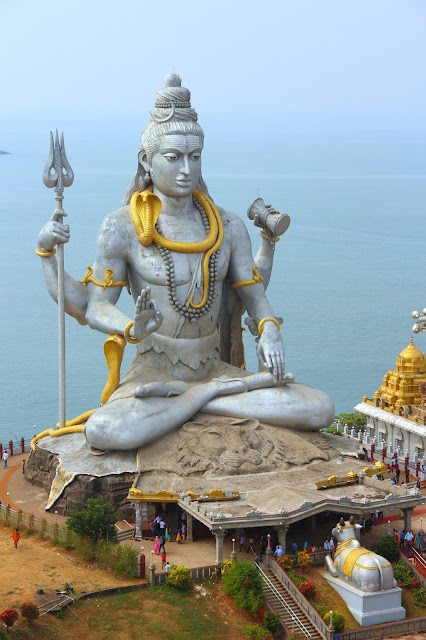 Then made a quick back up plan which will allow me to get my reserved train back to Trivandrum. Finally counting and calculating up and down in Google Map, I chose Murudeshwar. In next few seconds my late running train reached station. I got in and had breakfast with a veg sandwich. This time there was few Keralites who was travelling to Mookambika Temple. And then in next 2 hour I reached Murudeshwar station- not much crowded. But they have a very good retiring rooms and cloak rooms. 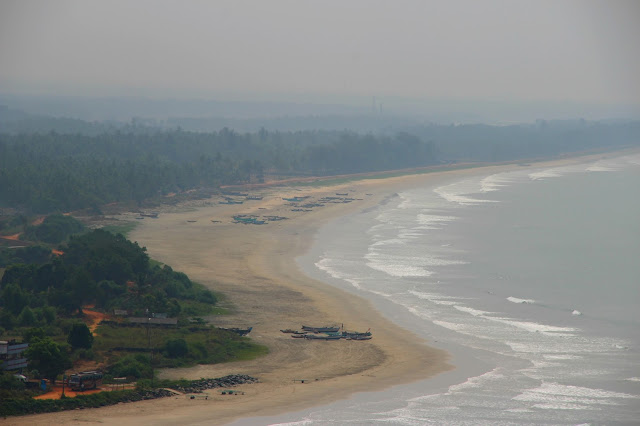 I kept my back pack there and with my sling bag and camera, hired an auto to Murudeshwar Temple. 4+ hours was in hand so leisurely roamed around and got in the Que to the watch towers which has 14 floors. The Que has Indians and few foreigners and as like in any other Que people were fighting to get in first. As I don't have any hurry, I kept quite and at times looked behind the big statue of Lord Shiva. As it was my turn to get into the lift, 6 ladies whose coming from Russia got in front of me and said its their turn. 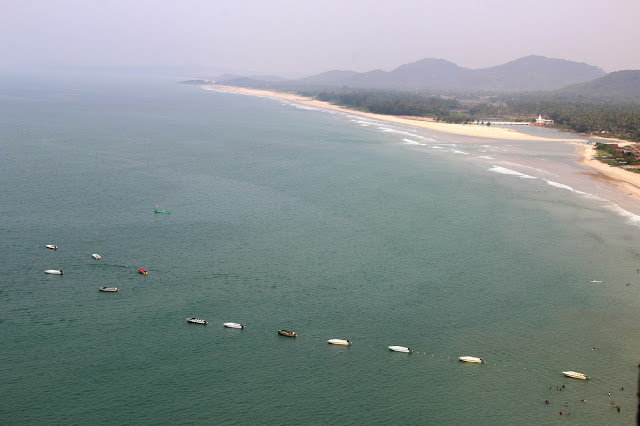 I spoke to them but all in vain. It was first time seeing the respected foreigners fight in an aggressive manner. Anyways, I got my turn in next 10 minutes. 2 lifts has capacity of 6 persons to carry to the top. When you reach top you can see two side, shores of beach which have boating and other side the land of Murudeshwar and the opposite side the view of Shiva Statue. 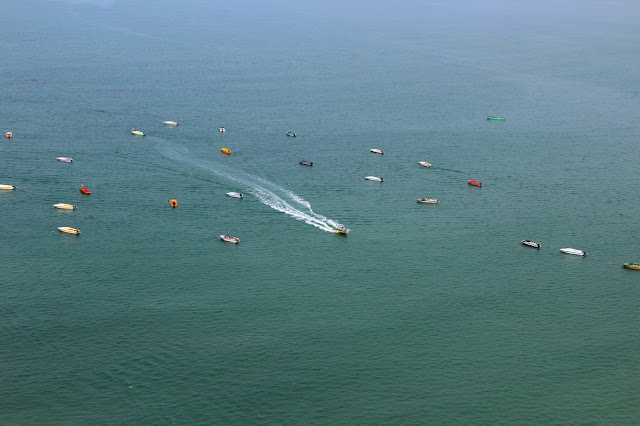 I spent quite lot of time there watching the sea and later got down to see the deity and it too has a long Que and rush of people. I was holding my camera bag and yes, it was my mistake that I was less concerned on my sling bag till I reach the counter of laddu prasad and check my bag to see my wallet. "It was not there!". I still could feel that micro seconds which I thought of numerous things which is starting from my key of back pack in railway station, its receipt, return ticket, my memory card, Credit/Debit cards, cash, PAN card and voters ID and much more receipts which even include my flat's gas connection deposit refunding receipt. 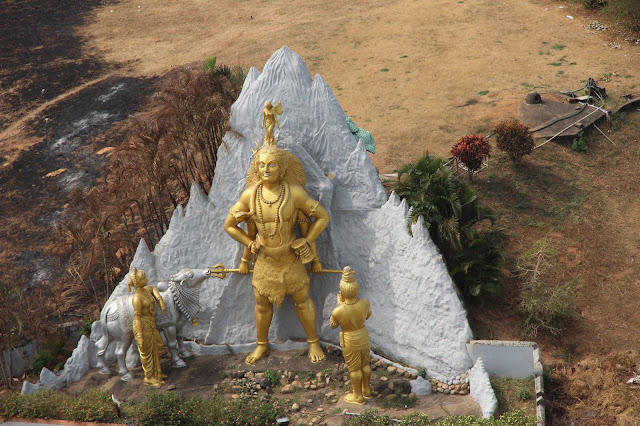 Few minutes, then it was a run to the security and when I spoke to him, I realized my voice is breaking and I am close to tears. He directed me to senior security officer and came along with me. Then it was in all filmy style as they blocked all the entrance of temple and told me to stay there. I was doubting one person who stood behind me and then it was an identity parade in lunch hall where they found him. Before entering the hall they strictly told me, don't point at him if I see him in the Que. 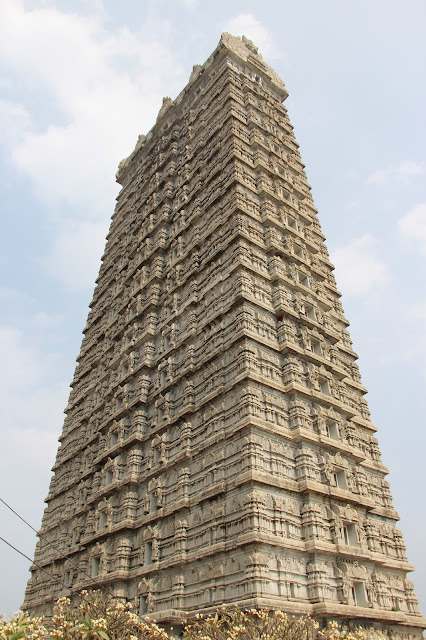 When I pass each row in that hall, I was sure that I wont see him again but in third turn I saw him and came out of hall reported to security. But that poor fellow was not the one and by then the team identified another regular theft robbery team of 6 people and 2 of them were already gone out so the chance of findinjg my wallet was low.
By then I was broke down with emotional dilemma (Seriously while I writing this, I am smiling that I had a wonderful experience but it was not that easy there!) 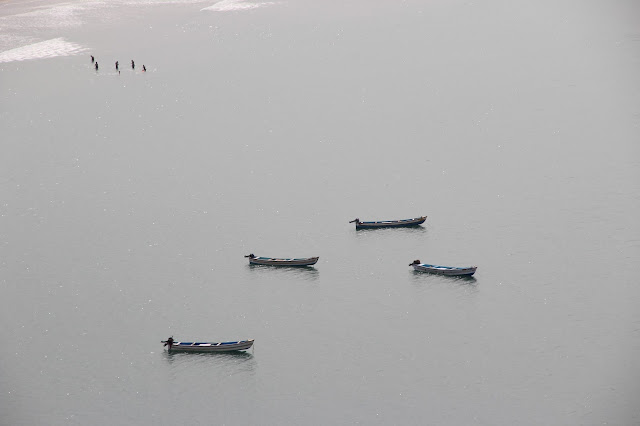 May be security team understood my situation, they took me to the lunch hall (without tickets and not standing in the Que, suddenly I became a VIP!) They gave me a plate and then with my choice put rice and other vegetable curries. Everyone was noticing me as I have a special chair in their kitchen and a security guard was always following me everywhere. Finally after the lunch I spoke to the manager and frankly said that I don't have a penny left with me and thankfully the thieves spared my mobile as it was connected to Power bank.
There was not much to explain but they can understand the situation and with a single statement "Can you give me 400rs? I can return it soon after reaching Trivandrum. I don't have much with me except 100rs in my pocket (which was a tip I learned in earlier stages of solo journeys to tackle such situations but that was not enough!) 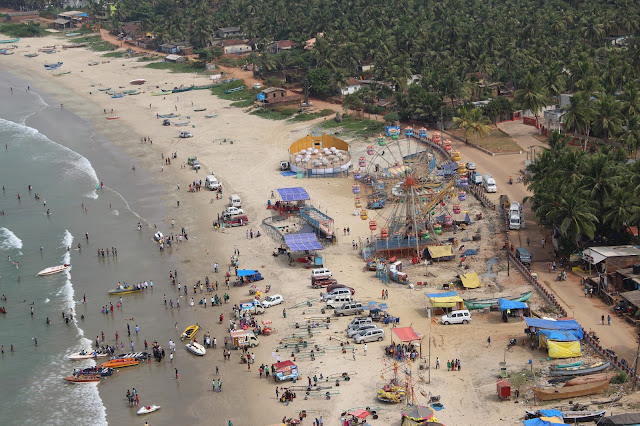 Finally with a receipt and account details of mine they gave me 400rs and escorted me upto the station in their vehicle and spoke to station master to relieve my luggage. It was a long conversation and Temple manager left me there but promising that they are a call away. Again waiting for one more hour and spoke to manager. By then 2 Keralites spotted me with my conversation and without even knowing language and broken English, they were waving their ID card to sign any document which they need to relieve my bag.
It was not Station Master is adamant but it was their rules and laws which wont allow them to relive it. Finally with long letter and a description of what inside the bag, they relived my back pack. There was one more hour still to go for my train. Two fellows who was ready to help with ID card was eating my ears and some how I avoided them with a mobile call and then took a long breath and sat back in one of the cement benches. Scrolled the images since morning one by one. It was quite a day but learned alot in short time. 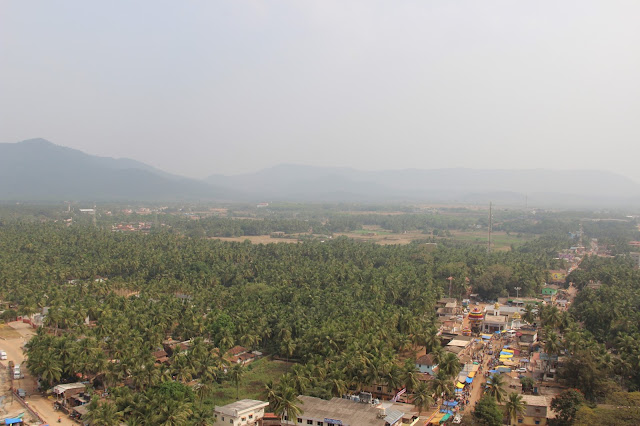 This time 60+ year old, man who was sitting besides me asked the train time. He was another solo back packer but not much healthy so locally he got a companion and looking forward to visit Kerala in next 2 weeks and he is basically from Jharkhand and literally enjoying his retired life (Later after reaching Kerala, he messaged me on one evening that he too lose his wallet and some how he managed to find fund to continue his journey to Idukki)
Friends knew by the time about my "loses", Naval was one among them who was waiting at Payyannur station with a homely food pack which his Granny prepared and when the train whistled its departure from Murudeshwar station, I thanked Shiva, you gave me saviours to handle the chaos which happened at your land- Murud-Eshwar!