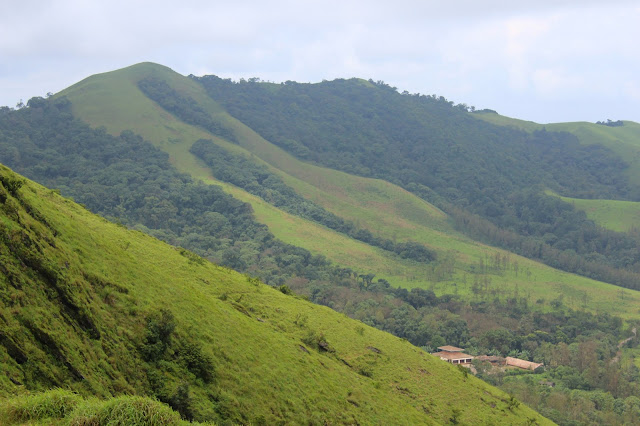 Long leaves of Onam and 7 days were charted to be spent at different places of Karnataka and Maharashtra . However, an unexpected change made all thing upside down and the first two days of trip suddenly became void. I didn’t have much time in hand and couldn’t cancel the tickets upto Mangalore. So spread the map of Karnataka and started finding places which is near Mangalore. That was how I came across the greenery 175km away from Mangalore. Finding transportation from Mangalore to Chikmangalore was another budget planning.
Finally, the day came to pack bag and reached Mangalore next day morning in Maveli Express from Trivandrum. 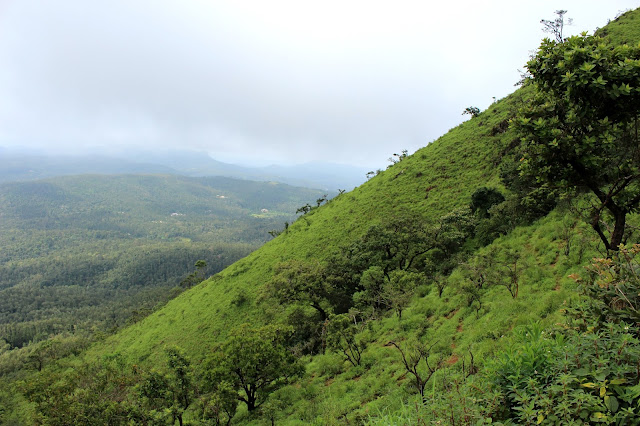 As Google and few blogs suggested, I headed to private bus stand in an auto. With the help of the auto driver, I spotted the bus to Darmasthala. Within the next few minutes, I was in the middle of Mangalore traffic with lots of crowded Mangalorian buses. In next one and half hour, the bus reached Darmasthala, which was quite and calm. Most interestingly, it was the realization of the stupidity I did depending on blogs that were written by someone who had no idea about the route. But still I convinced myself, that I got to see Darmasthala too. From there after waiting for few minutes in that deserted place, I got the next bus to Chikmangalore. Again a 2 more hour journey. This time I was going through dense forest with misty clouds above. It starting raining and I spent time wiping the windshield, enjoying the weather. It was a sudden change from the hot Mangalore climate to cool and cloudy climate of Chikmangalore (Yeah! I am reaching).. In between, the bus stopped for lunch and I was not comfortable to go alone and have lunch. In fact, I was much eager to reach Chikmangalore. When my watch showed me 2.30PM, I was standing in the crowd of Chikmangalore bus stand. 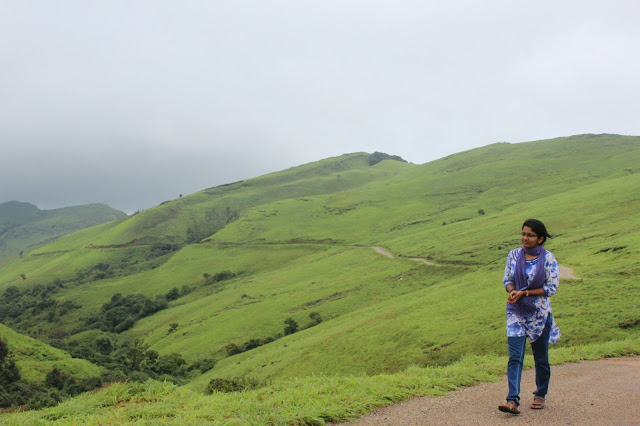 Next was finding the hotel that I booked in the last moment. The hotel manager directed me through the phone to reach their door steps. It was my first experience of Chikmangalore hospitality. I got a very warm welcome at reception from a 60 year old manager. I asked him regarding the places that I can visit in 2 days. He offered me a bundle of maps and other list of places to visit in and around Chikmangalore. After checking in, I rushed for a shower and then off to Belur and Halebidu to see the Hoysala wonders (I have mentioned their details and the travalogues here in this same blog! Feel free to browse!) 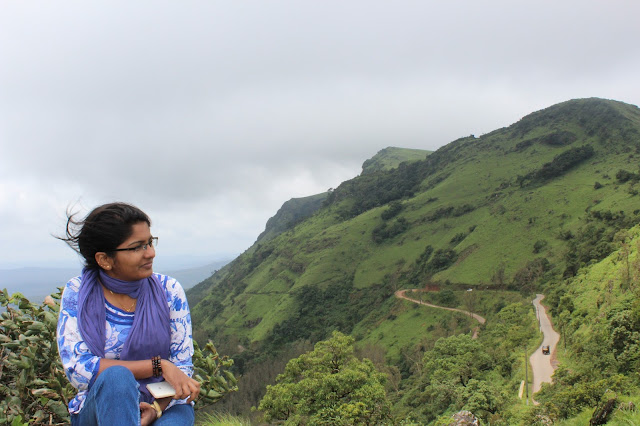 After the first day of roaming around and late dinner at a near by restaurant (after 8PM), I wrapped me up in 3 blankets. (Yes I am less tolerant to cold and thank fully hotel offered me extra blankets. I put my extra socks in hands and feet too!) The dinner was quite interesting just because I was alone in a corner of the restaurant and it had no one else except a bunch of guys having a weekend party at another corner. 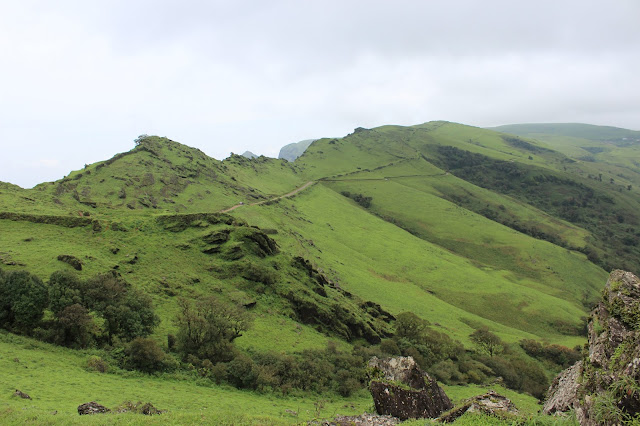 I opened my eyes with the shakes and knocks at my door in addition to the calling bell. It was 6AM and I jumped off the bed. I knew it was the signal to get hot water. Another 60 year old room-"boy" was standing out. He told in me in broken English to collect hot water from the pipe, as it will be available only for one hour. After getting a hot water bath, I switched on TV and searched for a Malayalam channel. When I got one, I increased the volume to fill the room with Onam songs. Yes, it was Thiruvonam and it was the first time in my life staying away from home during Onam. Suddenly a homesickness feeling scrolled in but before it took its toll, I stepped out to see morning Chikmangalore. From the hotel door, I could see the cloud covered mountaintops and the Manager told me my cab will come at 9AM. He arranged and called the cab and I started my journey exactly at 9 AM. 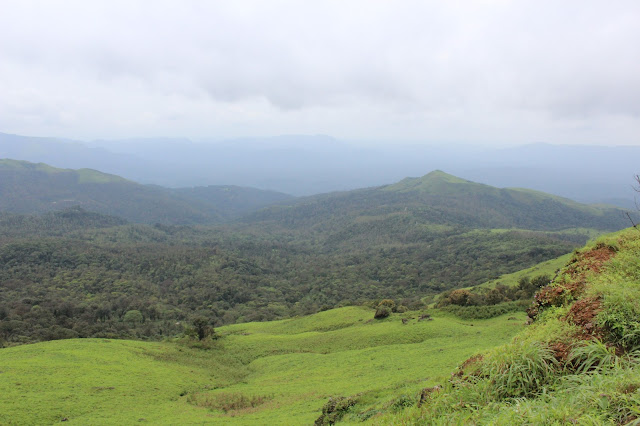 Krishna Gowda- he was the driver. But was more like a perfect guide. In fact it was his own car and he is running his own vehicles at Chikmangalore. Today his driver was on leave who was a Malayali and was on leave for Onam. Krishna was very friendly and was proud being Chikmangalorian. He started narrating the story of Chikmangalore the moment I got in the cab and he took me to the oldest restaurant in town for my breakfast.
From him I came to know that Chikmangalore is the native of Cafe Coffee Day and the owner is the no 1 exporter of Coffee in Asia with a 15000 acre coffee estate! In addition, Chikmangalore is the place where Coffee was planted the first time in India . For this same reason, you can see the coffee museum here. You can also see the Badra Tiger reserve. 5 rivers are born in this land. Thunga, Badra, Hemavathi, Vedavathi and Yegachi. Yegachi and Hemavati flows to Tamil Nadu and the others to Andra Pradesh. This small city has a population of 2.5L with the majority of people living with coffee plantation and related works. 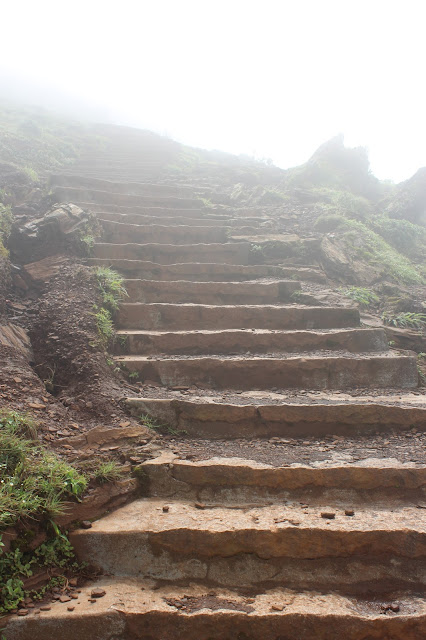 King Rukhmngadha gifted Chikmangalore to his second daughter as dowry. Another nearest town Heera mangalore was gifted to his eldest daughter which has a 1200 year old Kothanda Ramar temple. This is the south India 's first Rama temple. This was constructed by the Cholas dynasty and was renovated by the Vyshala Dynasty. 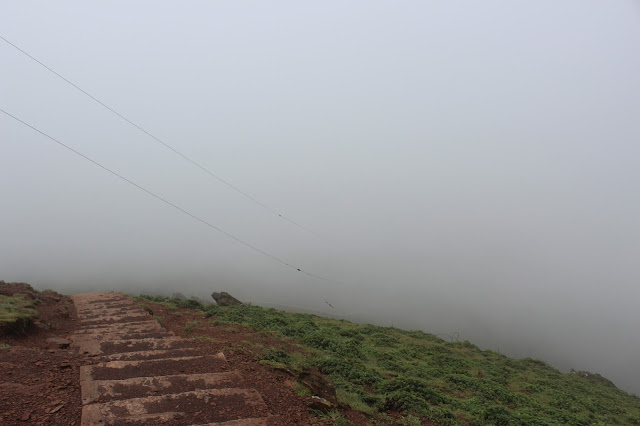 Listening to Krishna 's stories, I was reaching my first destination - Mullyanagiri, Karnataka's highest peak. Along the drive, I came to know that Krishna is one of the active member and the president in Chikmangalore adventorous club. Also he is a part of many eco-environmental activities at his small heaven - That’s the way he loves to call this small town, Chikmangalore. 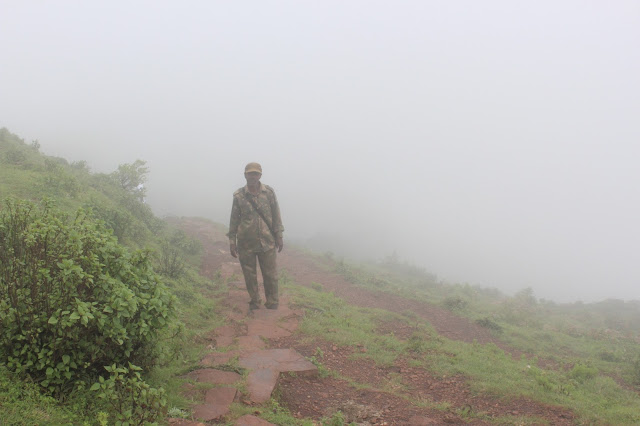 In next half an hour, we reached the check post of Mullyanagiri and after crossing the toll, I saw an old man in a dark green uniform asking something to Krishna . He said something we headed forwarded. I asked him what they communicated and Krishna replied that "He is the person who clean the top hill of Mullyanagiri and he was asking lift to go there. They don’t have vehicle and they have to walk a long distance to reach the top". Without a second thought, I asked him to call the guard and get him in the car. His name was Chenna Keshava (As the lord of Belur temple) and he was as close to my grand father's age. If we cant give him a lift, especially to someone who picks and cleans the nature's lap without plastic, then who else deserve a lift to that top station.
Krishna’s stories were still going on about a recent accident in the forest with a Tiger and the missing people who got lost in the deep mist. Our car was going through the zig-zag hairpins of Mullyanagiri. I was losing signals in mobile. Krishna stopped the car at intervals to get pics and it was hard to get camera back from his hands. For this same reason, there isn’t much photos in my album that doesn’t have me. 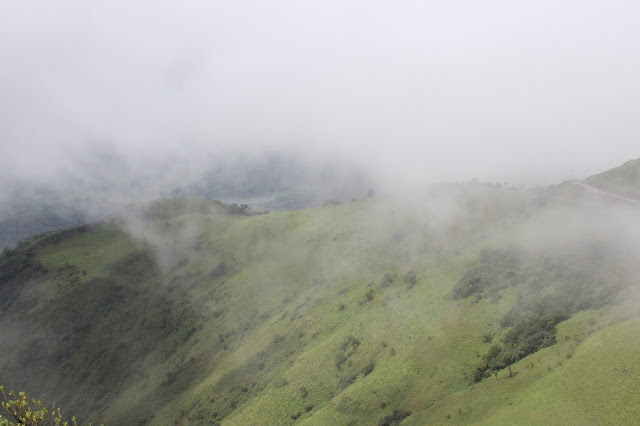 Krishna was saying that I was more lucky to see the clear and green meadows as it was heavy raining the day before. He was true and I realized it as I started reaching the top station. The view was breaking with the mist’s hide and seeks. The wind was blowing with all its strength and the temperature fell down to a pleasant one. Krishna parked the vehicle to a corner and Chenna Keshava accompanied me to climb the 500 steps that lead to the top point of Mullyanagiri. There was a language lag between me and Chenna Keshava but as usual I adjusted with the mixture of Hindi and English with some hand actions. He was smiling and waiting for me when I took a break during the climbing. To be precise, I heard some Malayali voice during climbing. A family was there but when I asked in excitement "Are you Malayali?", the response was very cold. 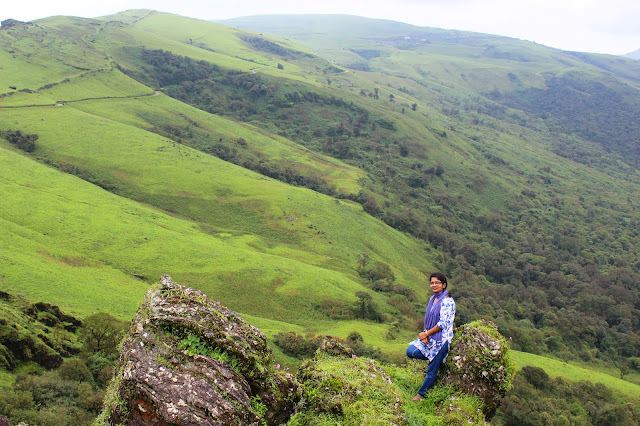 During the break in climbing, I took turns to see the flowing clouds and mists around me. I heard the sound of 'woo-wooo" of the wind that I have seen in films alone and my ear was getting cold and closed in that heavy wind. At intervals, the mist gave glances of meadows and near by mountains. I stood there for a while to get some clicks and luckily got very few without mist. 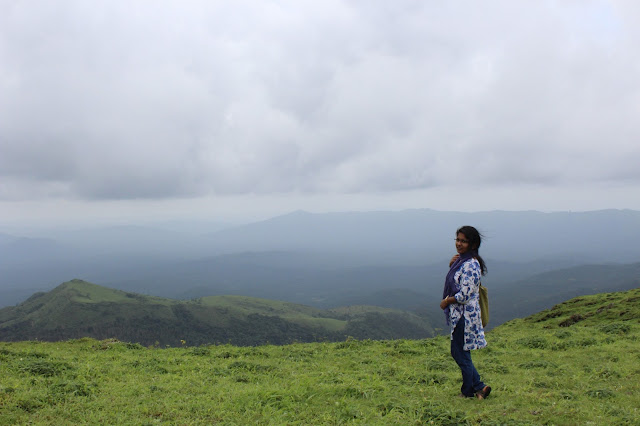 A stone was laid inside the temple at the top hill and wearing sandals were not allowed inside there. Chenna Keshava took me to the cave under the temple. There were only very few visitors. It was very sad to leave such a beautiful place that is more like a heaven. However, I have to climb down. I waved at Chenna Keshava, who will stay there till noon - cleaning. Krishna was waiting down hill and slowly we started to our next destination journey that was heading with another sets of hairpin curves...
Journey continues...