On the first day of my trip at Hampi, before bidding goodbye to my guide, I asked about the whereabouts of the Mathanga hills. The guide pointed his fingers towards a red hill. At its top was a temple-like structure that was visible through my spectacles. I asked him whether he could accompany me there. However, he was reluctant as it had more than 500 steps to climb. 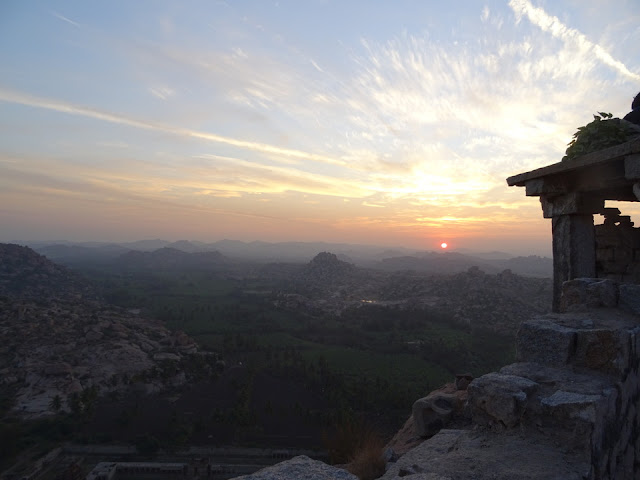 While watching my first sunset at Hampi from the Hemakuta hills, I made a plan for the next morning. After the daily updates to my “Solo traveler” whats app group, I asked my buddy, Saran, to tell me when is the sunrise time for the next day. It was at 5.59AM. 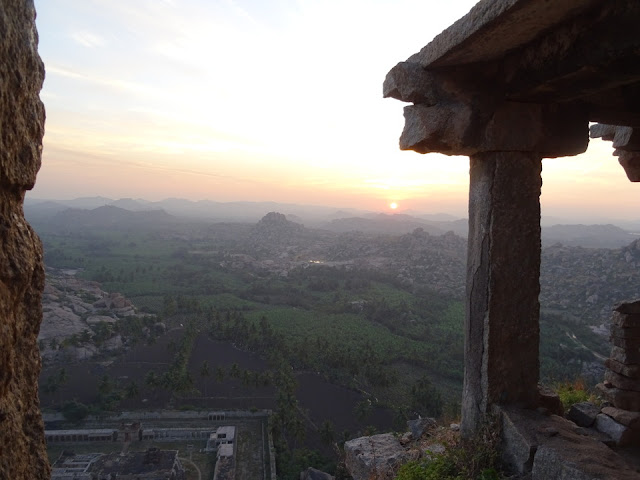 My alarm rang at the usual time- 5 AM! In less than 10 minutes, I was ready with my Cybershot and handbag. However, it was still dark outside. I waited for 10 more minutes and then peeped through the window. My eyes caught some silhouettes of some foreigners walking through the Hampi bazaar in the Virupaksha's north tower light. Then without wasting a moment, I locked my room and stepped out to catch the beautiful sunrise! 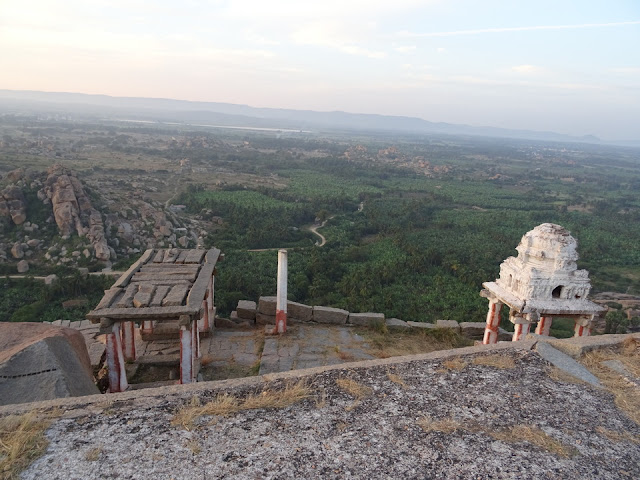 The surroundings were filled with darkness and it was very cold outside. There were no signs of witnessing a dawn anytime here. It was wee hours for the Hampi people. I crossed the bus stand and the auto stand. Some people were frowning at me. They might be thinking "Where is she going at this part of the hour?" I started walking towards the Achutharaya Temple. But, as I got closer, I realized that the place seems deserted! (It is 5.30 in the morning. And... Brrrrr... It is soo cold. It is just me, alone, wandering around the town in “that” hours of the night. Just like a wandering nomad!) My route map ended near the Hampi police station. There was no one to ask for the direction. I looked around and after a minute, I saw two women coming from a distance. Yes, obviously I don’t know Kannada, but I asked "Mathanga hills?" and they pointed to a direction. 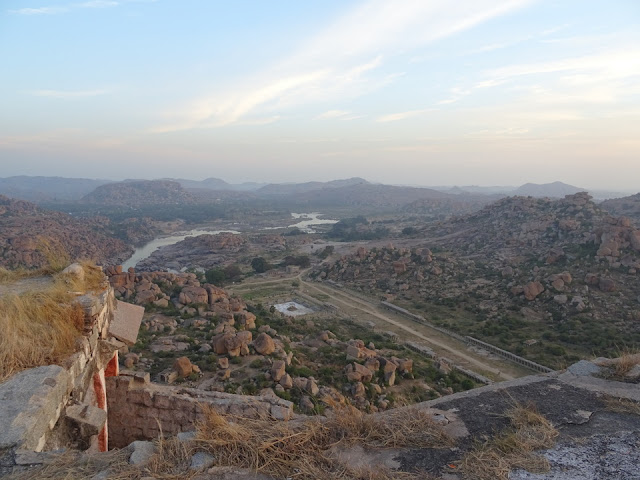 I went towards that direction. As I got closer to the hills, it was getting darker and an eerie silence was following me. Again, I was lost in the midst of boulders. Not a single person to ask! But then, I saw some steps through the bushes. "It must be the way!" I exclaimed! I started climbing up the steps. Hardly 50 steps! I was totally drenched in sweat (Yes, it was very cold and I am sweating like I am in a desert. Ah, by the way, I haven’t been to a desert... I must include that in my future trip!). 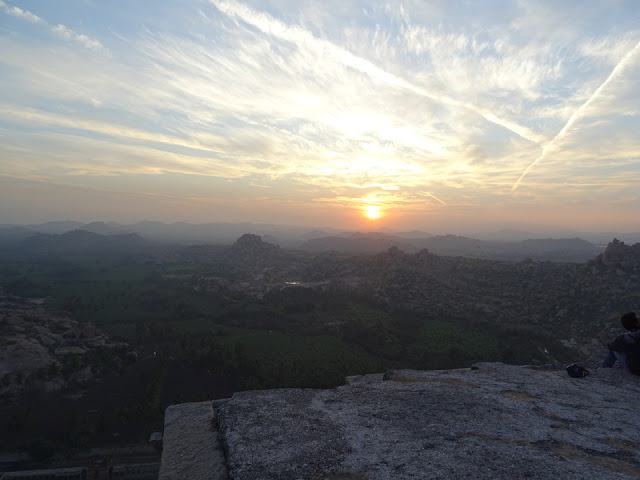 My knees were trembling. All I could hear were my short breaths' echoes. My last "food" was the early dinner that I had the last day at 6 PM. Biscuits in a bag was not a good option as it can attract monkeys lurking nearby. I took a sip of water and resumed my hiking again. The going was getting tougher after each step. At last, I was in front of a rock, which has steps just for namesake. Steep and slippery rocks on one side and a big family of monkey (which has not less than 30 members) at the other. Beyond them lies the vaaaast Hampi, stretched in kilometers. So a single step would cost me too much. 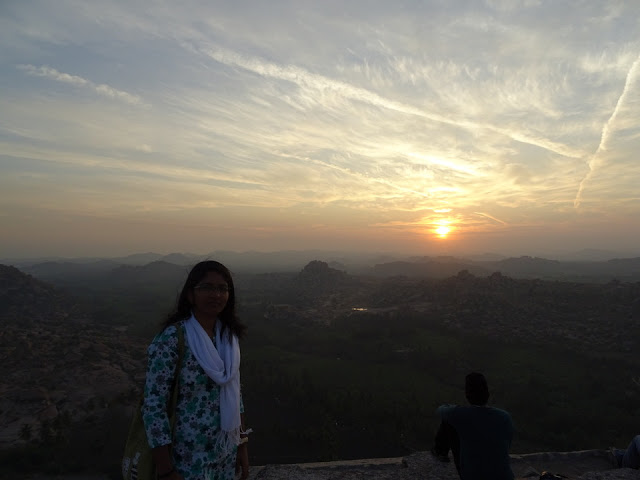 I looked at my watch. It was 5.50AM already! I had no time to squander. So I started one of my craziest climbing that I have ever done in my life. Just 3 steps and there... I slipped. While falling, I have to decide, where to land! Coz in one side, people can at least collect my dead body in good shape whereas, on the other side, it will be hard to even find my body. But luckily I fell on the rock where I stood analyzing the monkeys and the rocks – the starting point of my craziest climbing. Breathless like a dog, I looked around at the monkeys who came to check "What’s happening at this hour of the night?” They might have thought “Is she trying to entertain us by performing a stunt?" ;) 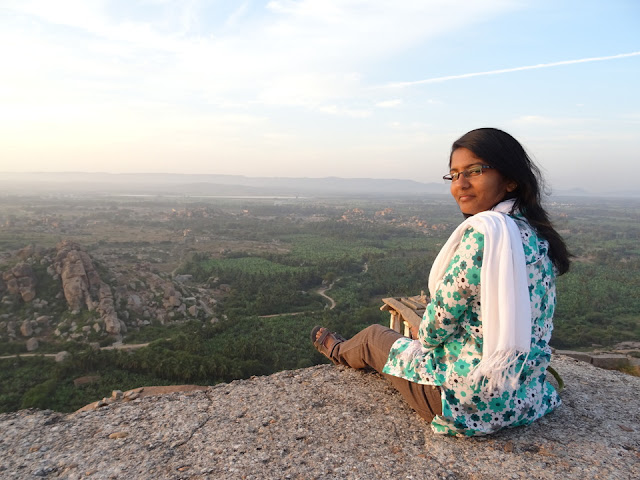 My knuckles were bleeding. My knees were better because of my jeans. Still, it was paining somewhere. Loans, bills at home and the only one to support the family – these thoughts came to my mind like a slide show presentation. I decided to withdraw my "sunrise plan". Nobody was around and I could see the sky above me getting yellowish. Yes, it's the sunrise and I am missing it. The tears that strolled through my cheeks were not due to the pain in the body. But it was due to my spoiled sunrise. In a few seconds, I heard some human sounds coming from downhill. When I looked at the direction, I saw three guys climbing their way towards me. One by one, they started climbing the steps. The second person paused and looked at me. 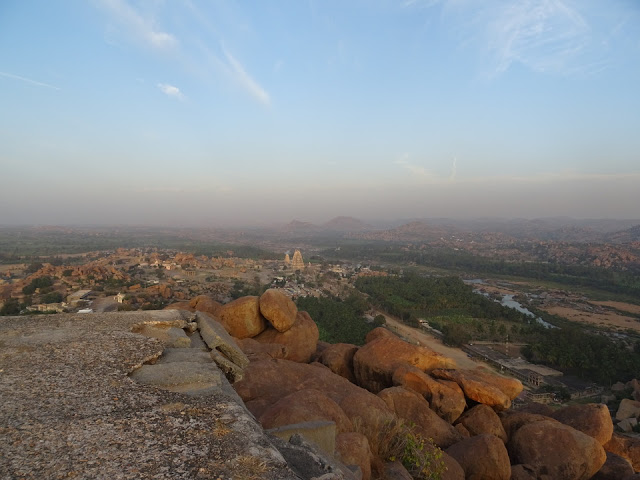 "Help?"
"Yes, thank you. But it is hard to climb" I said.
"Get up, we will help," he said and showed me how to step up.
I followed him. Half of the way, I was looking on the left-hand side of mine and then in the remaining half I focused my vision to his climbing legs. The third person behind me and within a few seconds, I was at the top of the rock. 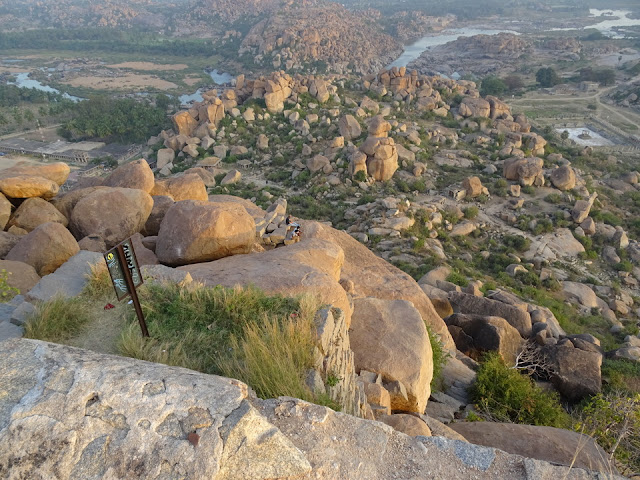 "Thank you so much!" I shook hands with them, but the other two were already heading up. Again, there was nearly 200 meters to climb ahead. They stopped in between. I waved at them and continued my climbing. I was bursting with energy as I saw the first ray of the waking sun. 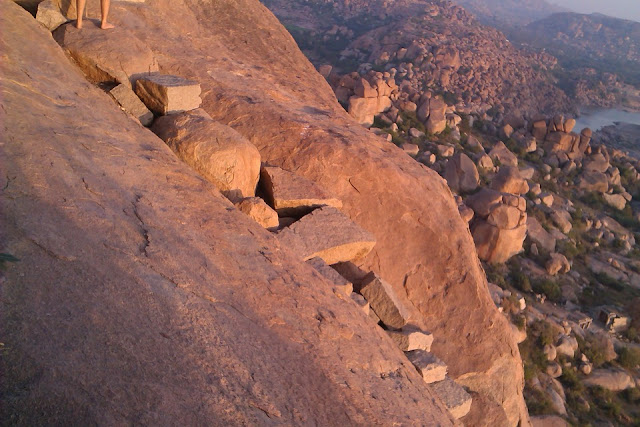 I ran through the last few steps and finally, I was at the top of the hill. The eastern horizon was in burning orange color due to the waking sun. I was smiling ear to ear. 6-8 other people were there and few were meditating. I removed hair clip and stood at the tip of the temple roof. The feeling was heavenly. The air was still cold and the bleeding cuts in my hands and knees combined with the salt in sweat were causing "a paining sensation". But, who cares! I stood there enjoying the view and the cold breeze that were blowing through my hair. 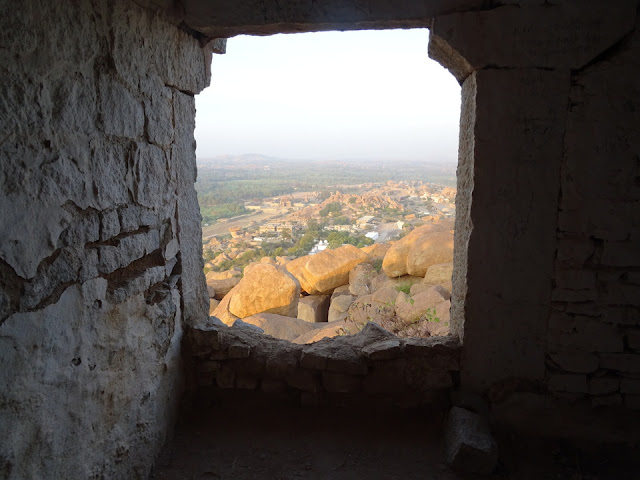 Just then, I saw the couple who helped me out with my photograph on the last day at Hemakuta hills. So this time, I asked them whether they can help me with a video. They offered their help readily.
By then I had spent 1 hour at the top. And I wanted to be there for a few more minutes. But the day ahead was scheduled for much more adventures. I was looking at the rocks and the trekking trails on my way downhill. 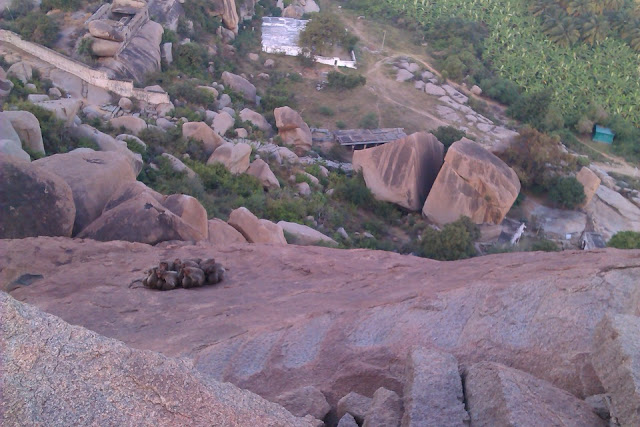 When I saw the rising sun, I totally forgot the slippery rocks. I even forgot to check how thin my trails were at many places. On my way downhill, I met two guys who were scared to trek down and was literally strolling through the rocks. This time I helped them and at the same place, I fell down. I stood up for a while. Took a deep breath, removed my sports shoes, rolled up my jeans, secured my bag and cam and started climbing one-step at a time. I helped the other two Kannadigans there. 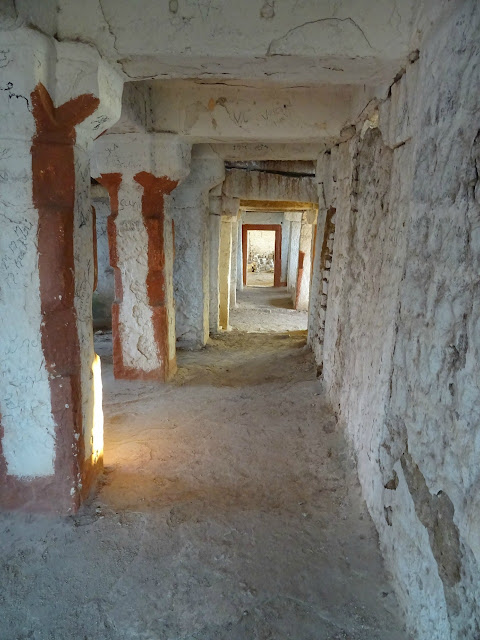 When I waved them bye downhill, they were asking me in louder voice which echoed in the bordering hills "Heyyy! Hope you have kitty friends!"
"What?" I turned.
"No, it was written on your bag that you have nice kitten friends". He laughed.
"Yes. I have many!" I smiled and turned around one more time to see the proud Mathanga hills.
"Until we meet again Mathanga" I whispered and headed back to my hotel for a shower. 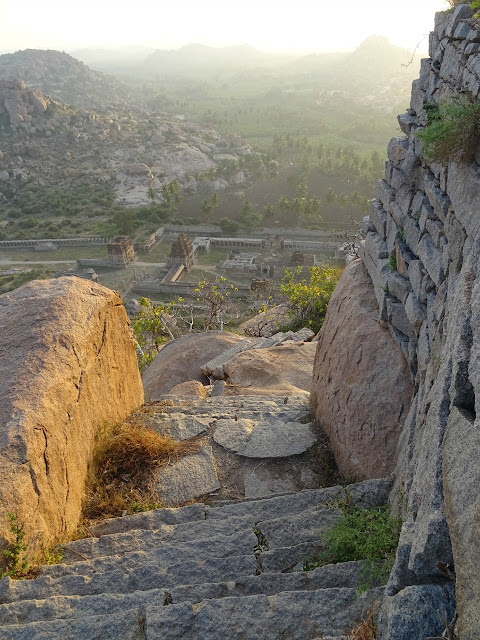