How I got my wings!

Ever since the wanderlust bit me, I am looking for a partner to accompany me on my journeys. Unfortunately, I couldn't find anyone. Also, I could not get some holidays that matched up with their planned trip dates. One day, as usual, while going through some website list, I found something that attracted me a loooot in their list. Yes! A one-day co-pilot training program! Again, this time too, the date was the problem! 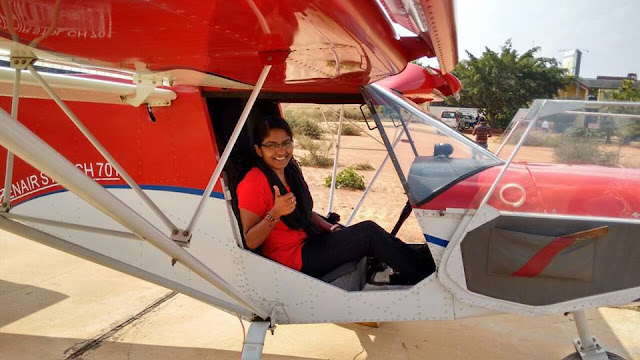 It was New Year time and I was wondering what to do with my holiday. Just then operator announced a co-pilot program on 2015 Jan 1. Without much thought, I booked my slot to get my wings!
On 31st morning, I reached the office with my backpack. After lunch, I took a half-day sick leave (Which was the last from the year's leave list!) and started from Technopark to go to the Kochuveli railway station. Finally, after some wait, I caught the train to Bangalore. Thus, my journey to fulfill my dreams commenced @ 4.45PM! 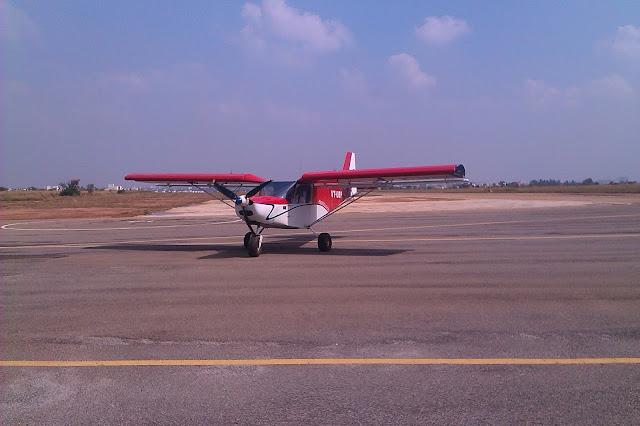 When the entire world, celebrated their new-born-year, I was deep asleep with my mobile in silent mode. Soon Bangalore welcomed me with heavy rain and the train was late by 30 minutes. I spent the 30 minutes on wishing my sister and my few other friends, who were angry with me, as they could not get across to me on time. The January rain was making me loose my hope of getting wings. My flying schedule was at 10 AM. While thinking, what to do next, I got a call from Jyothi Nair saying that they are canceling the current schedule and would arrange a new one due to the bad weather. They also asked me to call them back if I don’t get any updates after an hour. I was very happy to hear from Jyothi Nair, a licensed female pilot, who is living a dream goal by running a women-only travel company. Simultaneously, I was sad to encounter my flying dilemma. :( 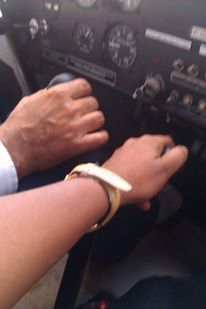 The train reached KR Puram at 7.30AM and without much confusion, I got the bus to my bestie - Savitha's living place near Banaswadi. Unfortunately, it was a working day for her. Yet she managed to arrange my breakfast. I took a quick shower and once I stepped out, it was time for her to leave for office. While I was waiving her bye, I got another call from Jyothi Nair informing me that the schedule might get postponed again, as the rain has not stopped yet. Could be because of my tone that she asked me whether I have any other plans at Bangalore. And she was stupefied to learn from me that I came to Bangalore just for flying ;) 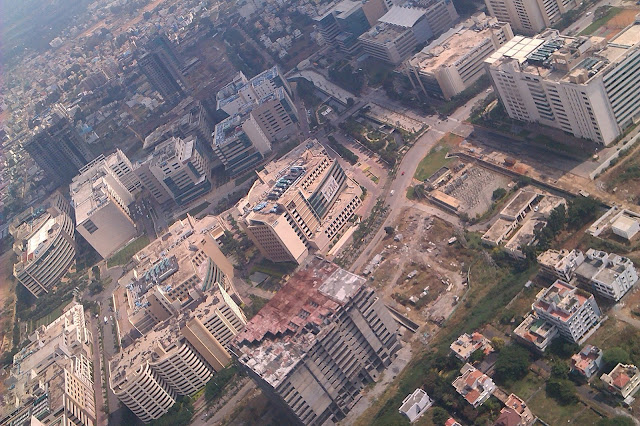 I stepped out to the streets of Banaswadi for a morning walk, with a prayer in my heart, hoping to stop the rain. It was already 10.45AM by then and then I got another call from the “Beautiful Journey”. This time they said that the weather was fine and I had to reach the Jakkur Airfield at the earliest. Then in a hurry-burry, I walked back to Savitha's house, took my bag and boarded a bus to Hebbal. From Hebbal, I caught an Auto rickshaw to Jakkur. After some confusion for about 10 minutes, I made a call to Beautiful Journey. Thus, I reached the airfield, right on time! 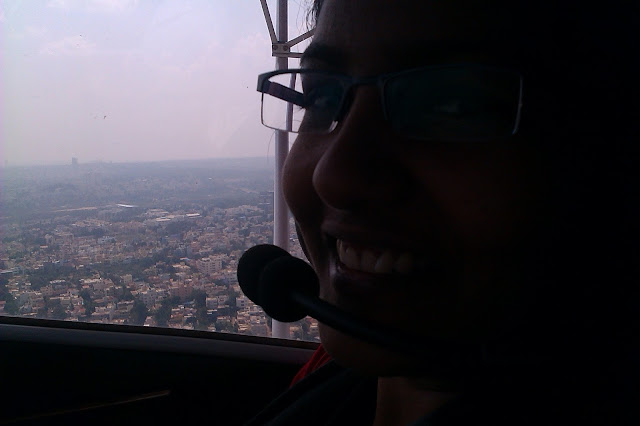 There I met two others - Anjana and Divesh, who both have their flight scheduled on the same day. I handed over my documents to the concerned person and they showed me my flying bird VT-USP at the other side of parking zone. :D 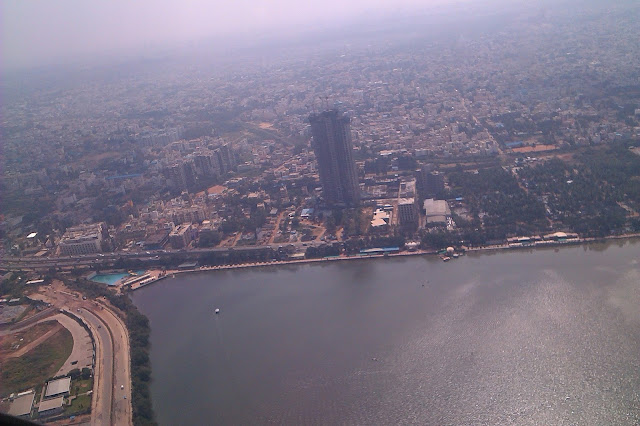 Anjana chose to fly first and so I watched her from the runway with another aeronautical engineer, who was explaining the technicalities and instructions of flying to me. When Anjana finished flying, it was now my turn for the fly! 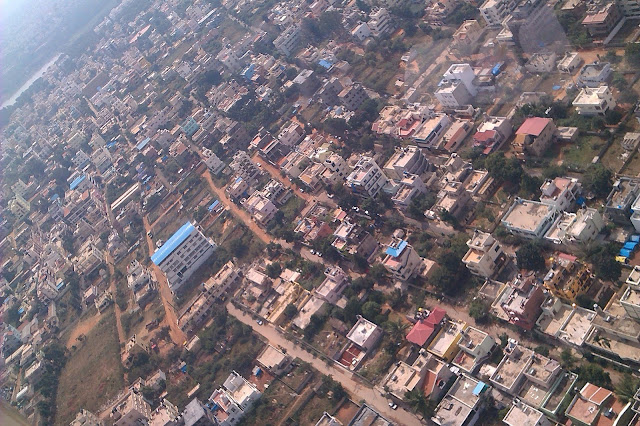 I got into the cockpit with my pilot, who once again explained the flying techs and tips. After his explanation, we took off. In just 2 minutes, I was in the air! I have never been on a flight before. Therefore, the excitement was beyond words. My pilot told me to enjoy the flight for some minutes and then he will hand over the control to me. We were flying over the Maanyatha IT park and the Hebbal fly over. He took some sudden turns and curves in the sky. The experience was just awesome! Fear was nowhere near by. Then over the distance, he showed me the runway and handed over the control to me. Now it was my turn to land "safely". I turned "my bird" making it head to the direction of the highway. As we approached the runway, I was a bit tensed to land. At the same time, I was sad to face the fact that my flying is about to get over. Controlling my emotions with my heart and controlling the plane with my brain, I landed “my bird” safe and smooth (O Yeah! ;))
Now Divesh was waiting for his turn. I watched him fly with Anjana. When he came back, we had some chitchat with our pilot and bid goodbyes to one another, until we meet some other time which some crazy ideas! 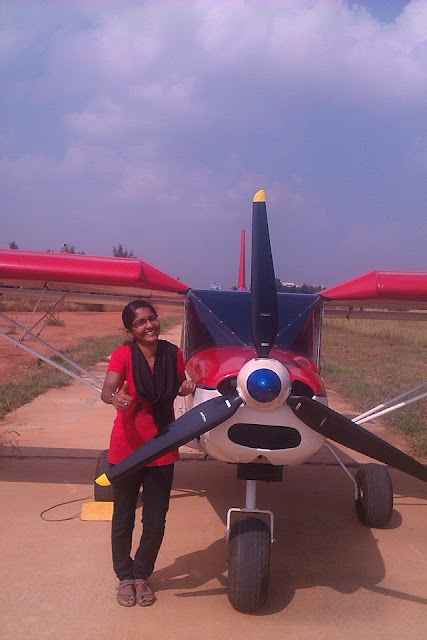 On the way back to the bus stop, it was very hard for me to hide my smile. I could see that people were noticing me, smiling simply. I got the return train from KR Puram and I was at my office the next day morning with lots and lots of "flying memories".
Do you want your wings? Are you interested in flying, like I did? Here, I’ll share with you two tips to help you fly:
1. Mail to appooppan-thaadi@outlook.com to know the flight schedules.
2. Pictures can be taken while flying (Yes! On Air!) using your mobile phones or small cameras only. They won’t allow you any "big" cams as DSLR.
Happy Flying :)