It was a destination ringing in my head for a very long time. I tried to persuade my friends many times for this trip, but as always, "concerns" were there. However, when I tried to go there alone, they frighten me warning about the burglars present around the place. That’s the reason why, even after my ever first adventurous trip to Odisha, I asked most of my friends to get me details about Danushkodi and arrange me vehicle to get there in advance. Luckily, my friend, Manimaran was there who extended his help wholeheartedly. He called and arranged a friend of his, Azad to help me by taking the roles of a truthful guide and a safe driver :) 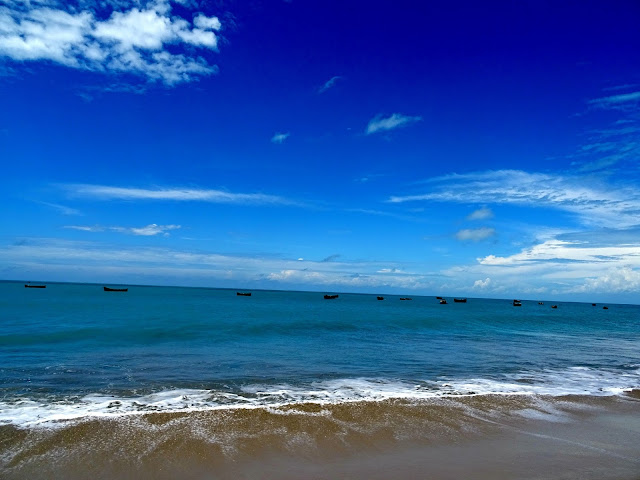 On the day of my journey, I came to my office with my back pack and left to railway station, straight from office, after 6PM. The train was heading for Nagercoil first and then to Rameshwaram. When I woke up early in the morning at 4.30AM, all I could see was the waves dazzling near the train. It was then I realized suddenly that I am crossing the Pamban River ! I was super excited! The train reached the station on time. It was 5.30AM when I started walking to my hotel with the help of the Google map from the railway station, avoiding the crowd and the greedy auto drivers. I was expecting a call from hotel manager but no one called me. When i checked in at the hotel, they were still trying to get me in my mobile, which was showing a fluctuating network. 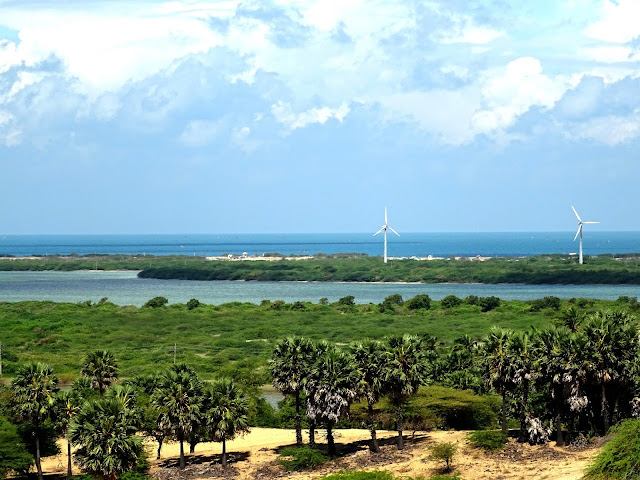 After a shower, it was hard for me to sit back inside room. Therefore, the solo traveler offered a morning walk to the holy city! Azad called me up and promised to be there by 9AM. He was asking whether he should bring a bike or an auto. (My suggestion to choose bike was a great choice! This was proved on the way to Danushkodi. Read on to find that out! ;)). Then at sharp 9 am, Azad was present with his 7-year old daughter in front of the hotel! 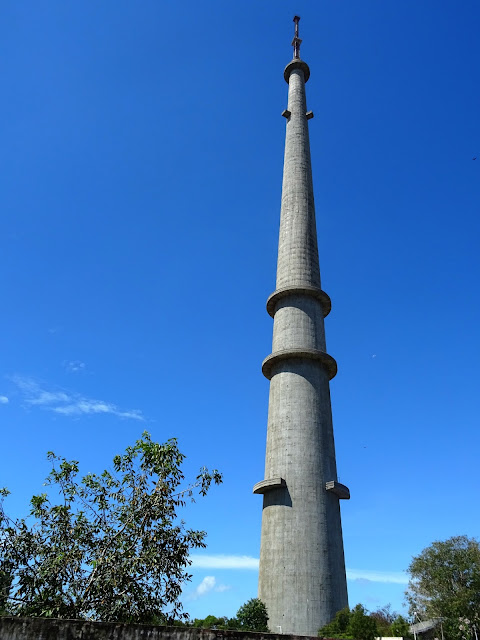 We headed for the Ramanatha Swami temple , which was very close, but as photography was prohibited and there was a big rush at the temple, Azad suggested that we first have some breakfast and then decide the destination list. In between the chit-chat, I came to know that Azad is a marine engineer. His daughter was a little reluctant to speak to me at first. But later, she was a great companion for me throughout the journey. (Thanks to my ice breaking skills!!! Just kidding :D). 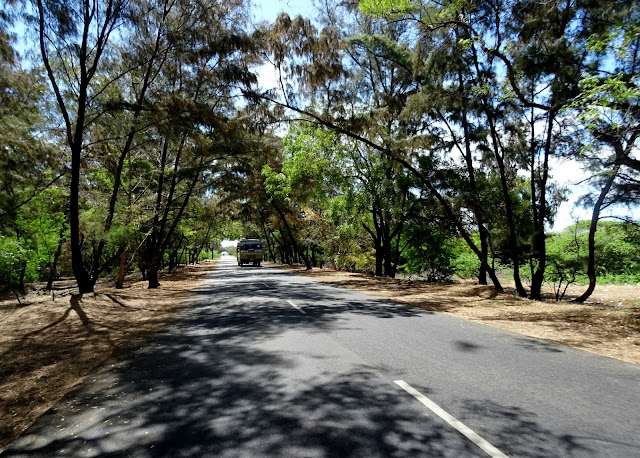 Our first destination was Ramapadam at where the Rama stood and watched Lanka before building the Rama Sethu. The temple is situated a little above from the ground and the view from the top is exhilarating. In one side, we can see the Mandapam and the Pamban Bridge and surrounding it is just Greenery and Blue-ry! 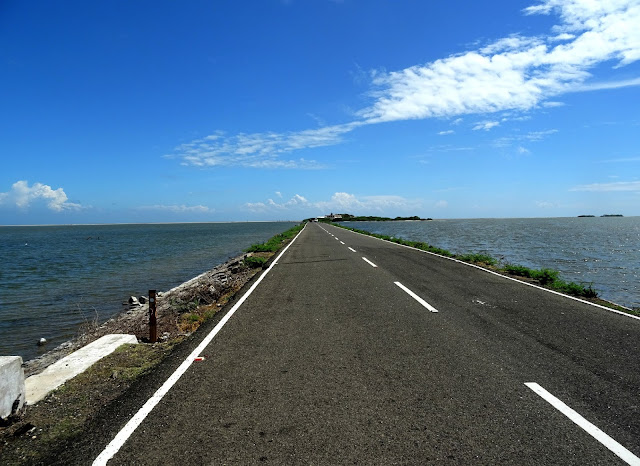 When we were heading back towards Danushkodi, Azad stopped to show me Ramehswaram's Doordarshan station tower which is not working now. All the way back to Rameshwaram and towards Danushkodi, we saw a lot of "Theerthams" which were intended to attract tourist to the spot. But as I had already listed the main places to cover, I had to refuse the itch to visit the Theerthams. 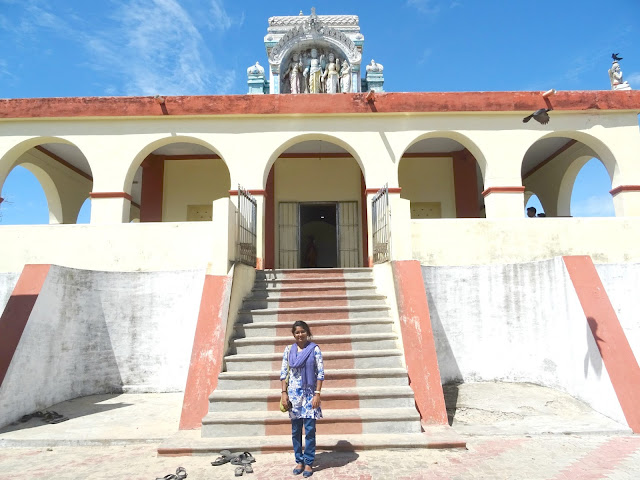 On the way to Danushkodi, the view in either side of the road was really beautiful! Clear sky and shimmering blue seas. It was a wonderful thought that I was heading for a place deep into the India Ocean with all sides of mine bordered with the sea. In a few kilometers, Azad stopped at the Kotharanda Ramar temple where Rama was crowned after the victory over Lanka. As I mentioned before, this temple is also situated in the middle of the sea. Your eyes can’t catch anything other than the deep blue color. In addition, it is hard to find where sky ends and the sea begins! :) 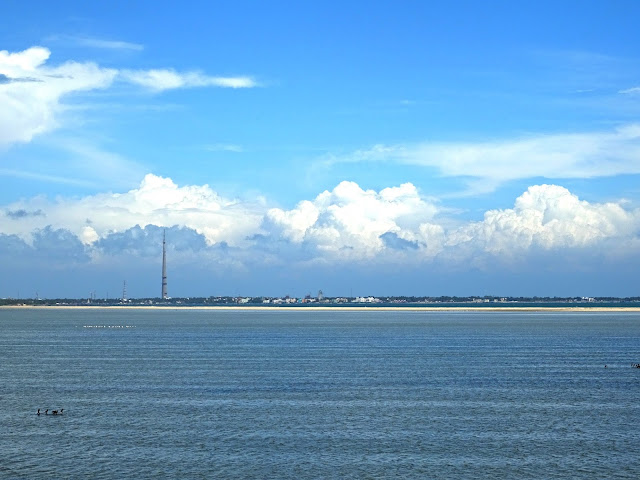 From there after some kilometers, we reached the Danushkodi check post. Here a new road construction was just taking place. Azad asked permission to ride his bike ahead and luckily, we got the permission. Until he got back, I was with his daughter, was playing at the seashore. Let me tell you one thing. The journey ahead was really "adventurous"! 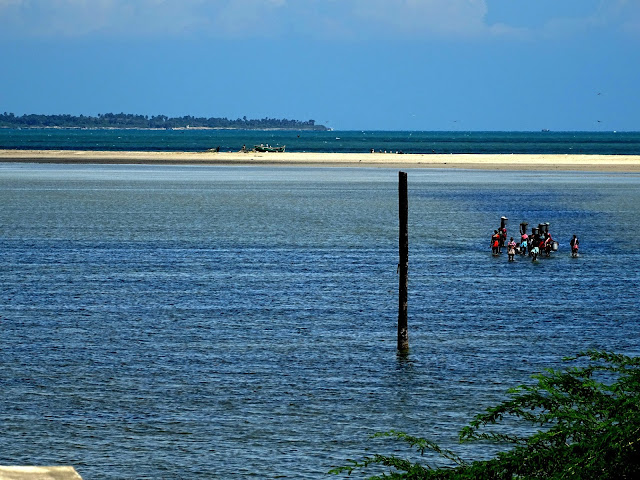 There was no road as such other than just mud and sand. Azad's bikes’ wheels were getting stuck and sunk in many places. Between the journey, we saw a tempo van which were taking people to Danushkodi charging 100 rupees per head. Finally after the tiresome ride, we reached the destination. I was really very much eager to walk towards the last point of India in the south, known as Sangamam. Not much people took the effort to walk in that hot scorching sun. Water around me was so much tempting to jump in:P. Azad was explaining about his boat rides through that area and after a few hours journey in the sea, he said that can see the light house of Jaffna . It was a mesmerizing thought that I am just 33km away from our nearby country and it was first time that I am being this close to another country! 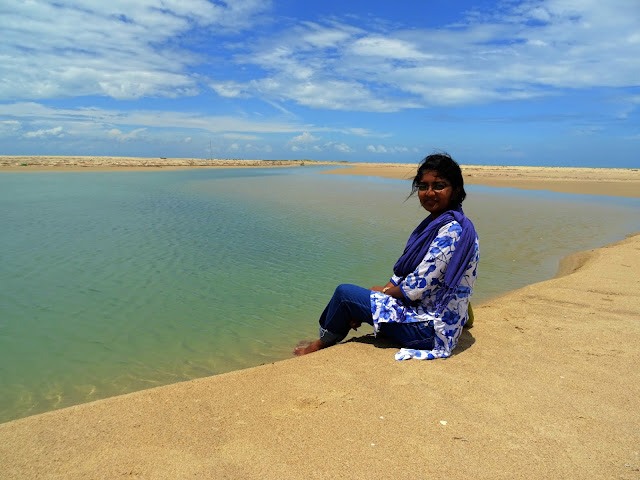 After the 1964 cyclone, the government of India announced Danushkodi as a Ghost city i.e. a city unfit for living. In the night of 22 December at 23:55 hours, train no. 653, Pamban-Dhanushkodi Passenger, a daily regular service that left Pamban with 110 passengers and 5 railway staff, was only few hundred yards from entering the Dhanushkodi Railway Station when it was hit by a massive tidal wave. A few meters ahead of Dhanushkodi, the signal failed. With pitch darkness around and no indication of the signal being restored, the driver blew a long whistle and decided to take the risk. Minutes later, a huge tidal wave submerged all the six coaches in the deep blue sea. The whole train was washed away, killing all 115 on board. The tragedy came to light only after 48 hours, when the railway headquarters issued a bulletin based on the information given by the marine superintendent, Mandapam. 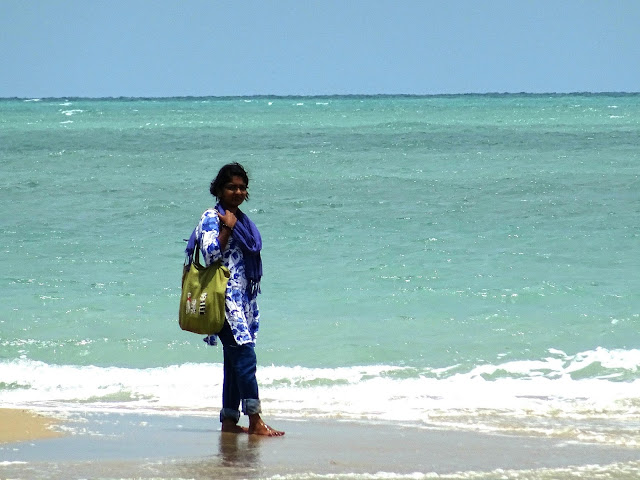 Also, even in the Tsunami incident, before the arrival of tsunami in 2004, the sea around Danushkodi receded by about 500 meters from the coast line. The interesting but sad thing about this journey was that I got a companion who had lost his great grand parents in this tragedy. Also from the same cyclone incident only 2 people were said to survive it. Among those two, one was Azad's relative. But if you come to this end, you can feel why it is called Ghost City . As per Hinduism, this is where Lord Rama broke Ramsethu, which he had build to rescue Seeta from Ravana. He broke this bridge with his bow. This is the reason why this place is called "Danush-Kodi", which means “End of bow”. 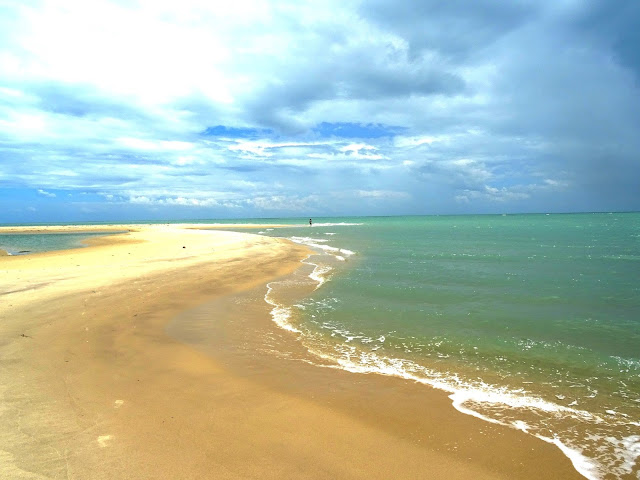 The places around Danushkodi and Rameshwaram are all related with Ramayana. Danushkodi is also a good place for bird watching during March-February as many exotic birds come to this area during this season like flamingos, etc.

Danushkodi is a pilgrimage destination too. Many people come here to perform their religious rites and poojas.

Local people of Danushkodi had set few shops here from where visitors can have snacks and drinks. It was our shelter too when returned from the Sangamam.

On the way back, we checked the Danushkodi church, post office and other ruins which were effected by the cyclone. You can feel an eerie silence here, just like it is a haunted place. No wonder why people call it Ghost city. 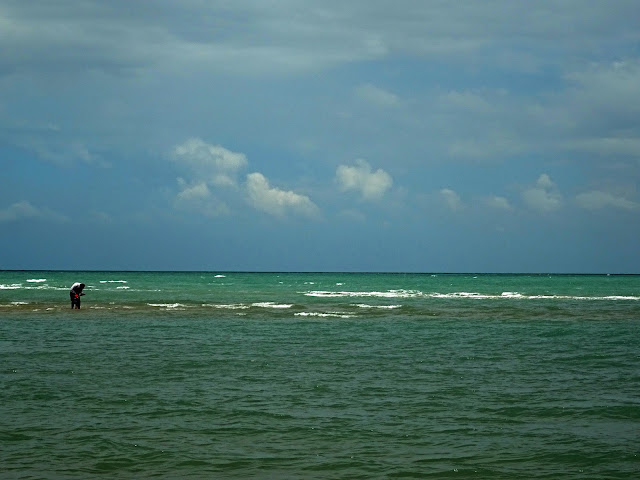 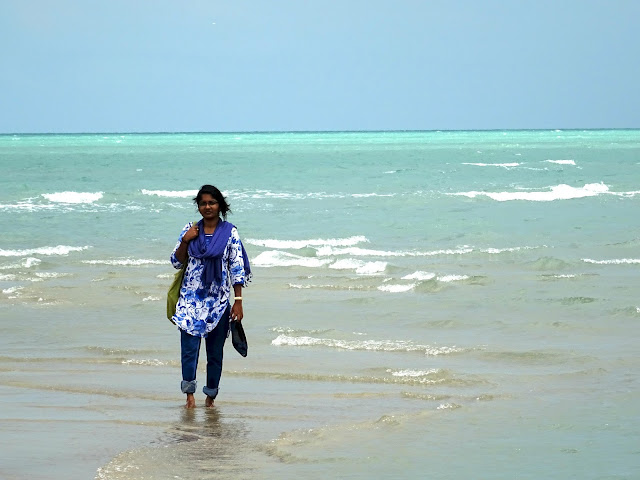 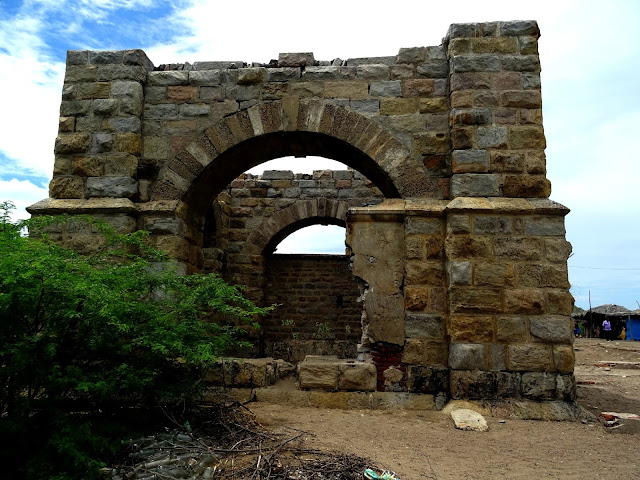 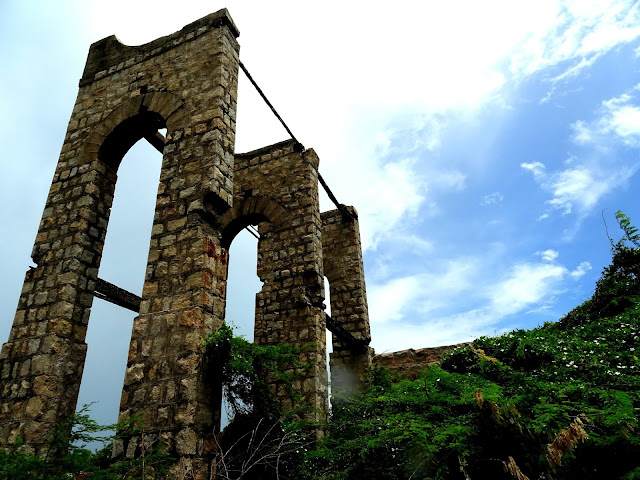 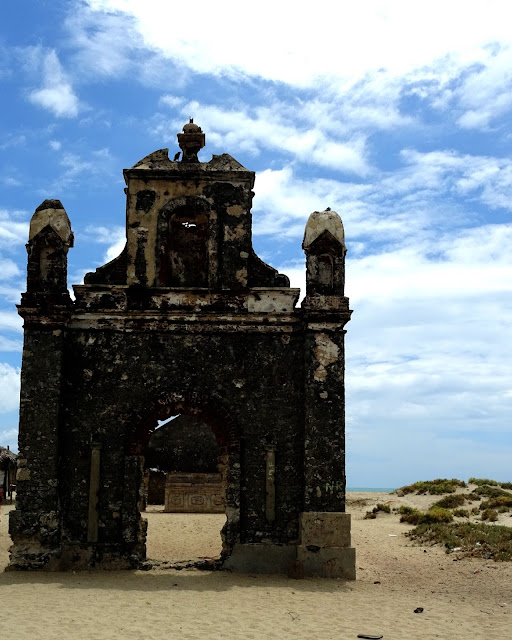 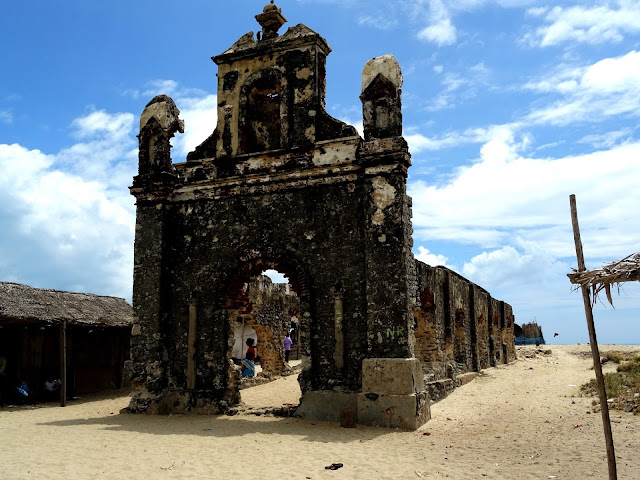 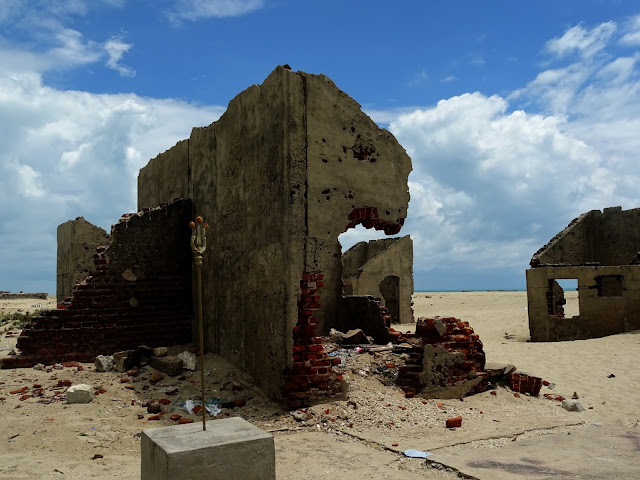 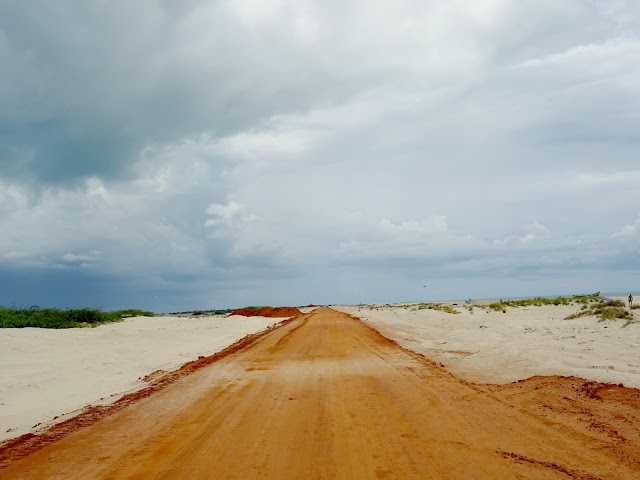 We headed towards Rameshwaram in 2 hours. The return journey was easy as we were coming through the side of the road that is new construction is happening.

Tips:
1. Dont think that sunscreen will help you here!
2. Try to go their with a bike :)
3. Go before noonand finally…
4. Be ready for a bath :)
And yeah, there are no burglar threat there :) It was there before the established road to Danushkodi. So no worries now :) 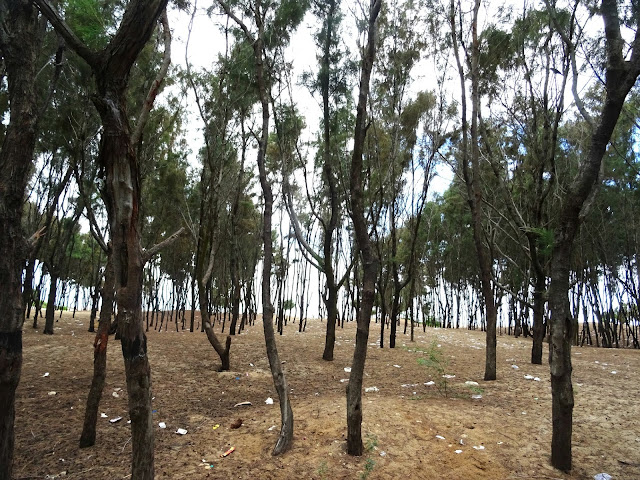