That’s how I ended up as a solo traveller!


The question that I faced soon after my first journey was - Why travel alone? And my answer is: “It just happened that way! Not on purpose.”

Before I show you the places where I have been to, I would like to share with you how this itch for wandering began and how I ended up traveling alone.

I love traveling since my childhood days. May be because I have the blood of a lorry driver who travelled across India. Or it could be those famous travellers who inspire me during the history classes! Or it could be the advent of travelogues through Television Channels! But whenever I think of traveling, my main concerns at that time (even now too!) were:
1. How to travel and
2. who will accompany me during my journeys.
The answer that I used to get from the people who knew me was very simple. “Your husband!” But unfortunately, there is no one fulfilling that role till now.

On last November I got a couple of holidays from my office as a result of my overnight stay backs. So taking a day off or two to spend the time with my family was a simple option. However I felt that there is no thrill in that, and it lead me to think the other way round! A tougher option!!! ;) A journey to a place beyond Bangalore!

So I decided to choose a location for my journey. The place named Puri popped up in my mind. The temples, the beach and the stories that I have heard about haunted my mind. So I googled up the place in the Indian map and found out its location. Then my next step was to decide my mode of travel. Planes, trains, boats, bus, cars or even lorries ;) – What a variety of options! Which combination should I choose? After a lot of pondering, I finally decided to settle on the most economical way of traveling across India! Trains!!! So I checked up trains that would travel from Trivandrum to Puri and back. Alas! To my dismay, there was no such service. So I googled out the nearest railway station to Puri. Yes you guessed it right! Bhubaneshwar!!!

There were two trains, but I chose the one that starts on Thursday - as I get two more days as weekend holidays J. Then I checked the return trains and its fare.

The next step was “Who will accompany me with my travel”. To find that out, I called some of my friends. The first person whom I approached told me that he needed some time to think as it would be tough to handle his 2 year old son in the train for 2 days. Later he confirmed his answer. He couldn’t come. The next person’s concern was his project which was about to start in a few months. So he was worried and dropped the idea as he wouldn’t get leave on time. Third person told me that he really wished to come. But due to financial constraints (and I had not much money to afford another person in my travel budget) he also dropped the idea. Finally the last and final companion was my dearest friend Shinu Jacob. She agreed over the phone to come. Enthralled I called her in the evening. But it seems that her roommate brain washed her telling that it is a long journey and traveling in a girls only group to a very far place is not be safe. That too in Trains!!! So I was left with no one to accompany me in my adventure. But my thirst for travel made me stick to my plans.
So I looked up the tickets. They were in the waiting list. Then it happened! Without any rethinking I booked tickets to Bhubaneshwar.

I booked my tickets to Bhubaneshwar but to book the return tickets I woke up in the middle of the night. But then I came to know that it can be booked only after 12.30 am. Standing up with drowsy eyes till 12.45 am, I tried to book it once again. But to my dismay, it showed me that I can book the tickets only after 8 am in the morning. Again after a looong wait till 8 am, I started booking the tickets online. But the tickets that were “available” a second ago turned out to be in “waiting list” now!!! Fingers crossed and hopping for the best, I applied. To my luck, my application for the compensatory leaves at the office got confirmed in my desired date. Finally everything was going according to my plans!!!
Hence was the commencement of a great journey! My first step to explore the world beyond Bangalore! Another page in my “Solo Traveller’s Diary!” (By the way, have you read that? Don’t lie. I know that most probably you wouldn’t as I haven’t started writing it! Caught you there!!! Ahem lets continue…).

After my first journey, most of my friends asked me to call them up on my next trip. There were girls and boys too. Folks of various ages. However, I disappointed them all and simultaneously surprised them with my next solo journey! The reason for the “solo” part was because of one of my friends, Sabitha, who encouraged me a lot by talking about the thrills I experienced in my first solo travel. I could go anywhere I wished to. I could plan irrespective of others concern. I could keep mum whenever I needed to. I could get to know new people. I could skip my lunch or dinner to visit more places. I could control my hunger and I stay awake at any time. I could start or take breaks during my travel whenever I felt like. No constraints to stop me. Absolute freedom! And to add on to it, I get to spend a lot of quality time with me - to understand my inner strengths, to realize what my dreams are, to see them and chase them, to trust on my wits to handle things on my own - especially at unknown places, to manage situations which comes unexpectedly over a well planned trip. But the priority always goes to –
1) Safety,
2) Not getting lost in between the trails and
3) To leave a track behind wherever I go.
I feel that not many people understands the thrill of the aforementioned things and I am glad to be the one to enjoy these thrills! On top of that I am also very used to being alone. So the question “Don’t you get bored when you are alone?” also dies.

That’s why I chose to be alone in my travels!

That’s why I chose to be a solo traveller!

Thanks for reading! Stay tuned for more!!! 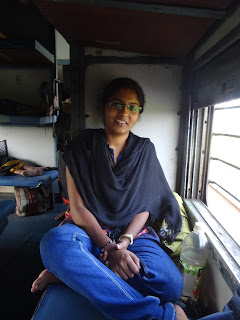